Man Utd Get a Helping Hand from Abroad with Google+ Hangout 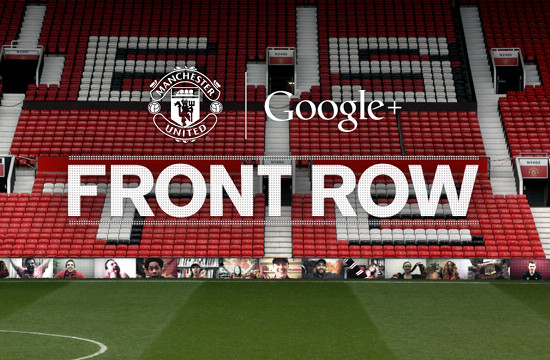 adam&eveDDB and Google have teamed up with Manchester United to offer a select group of United’s international fan-base the opportunity to “be” at the Theatre of Dreams -­ live -­ no matter where they are in the world, through “Front Row”.

In a world-­first, on Sunday 16th March 2014 -­ United vs Liverpool -­ United fans will have the opportunity to cheer on their team live, appearing via live Google+ Hangout -­ the free, multi-­person video call feature -­ on Old Trafford’s pioneering digital hoardings.

Throughout the match, Front Row supporters will be able to share in the magic of being at Old Trafford, joining 75,000 ticket holders and fellow Front Row participants the world over.

Fans will be invited to share a picture on Google+, along with the tag “#MUFrontRow,” which showcases their love, passion and commitment to the club. A handful of the submissions will get the opportunity to be the very first Front Row participants in world football.

After the match, each Front Row participant will receive professional photographs of their appearance, as well as a welcome on United’s Google+ page, shared with their nearly two million followers. The #MUfrontrow concept was developed by adam&eveDDB in London who work with Google globally.

Manchester United’s Group Managing Director, Richard Arnold, said: “This groundbreaking initiative offers a dynamic and innovative way for our fans worldwide to get even closer to the club they love. When we expanded our latest social media platforms last summer Manchester United became the fastest sports organisation to reach one million followers on Google+”

“Working with Google we are giving the chance for some of our 659 million followers around the globe to have a unique opportunity to be pitch-side at one of the biggest games in world football, something that is a dream for all United fans, no matter where they live.”

Head of Google+ EMEA, Cristian Cussen, added: “Hundreds of millions of United supporters in every corner of the world dream of experiencing a match at Old Trafford. It's one of those sporting events you cherish for the rest of your life.

"For Google, Front Row is an exciting experiment into what the future of supporting your team could be, and we couldn’t think of a greater partner than Manchester United to kick it off.”

In summer 2013, Manchester United became the fastest the sports organisation to reach one million followers on Twitter and it continues to be the fastest growing Premier League club on Facebook, Google+, Twitter and Instagram. For more details, supporters should go to google.com/+manutd.