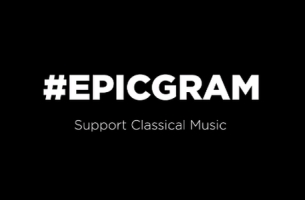 Instagram and classical music? It could be the next big thing. Epicgram is the first audio filter that elevates your daily activities into epic movie moments, combining slow motion with classical music masterpieces. The result: an addictive app that will bring the Belgian festival B-Classic, the music label Alpha Classics and classical music to a wider audience.

The Epicgram app, created by DDB Brussels, is new, striking and, above all, quite unique, because Epicgram is specifically intended to promote classical music. To demonstrate that classical music is still relevant and far from out-dated, a creative team focused on creating a new audience and acquaint them with the joys of classical music, urging them to share their joy on social media. The idea to combine slow motion movies with classical masterpieces is compelling: a jump into the pool, a frolicking dog or a dancing colleague has never before looked so epic. Each filter on the app has its own theme, allowing you to choose from romantic, heroic, melancholic, dramatic or euphoric music. There is something for every moment; when on vacation, doing exercise or hanging out with the kids.

Users create or choose an (existing) movie, select a highlight and then add the appropriate audio filter to create a truly epic moment. Epicgram has all the biggest classical hits. Composers such as Mozart, Vivaldi and Beethoven top the list. The app is also very user-friendly. A clever click-through link to iTunes and Spotify means you can purchase songs immediately and store them to listen to again later.

The soundtrack of our life

Epicgram is the work of the Belgian music festival B-Classic and Outhere Music. The latter is a large independent production and recording company that has become a key player on the international classical scene over the past ten years. Their flagship label Alpha Classics represents many artists of international stature. B Classic is a quirky classical music festival in Tongeren, which by the way doesn’t shy away from the odd marketing stunt. In 2014 they already captured the attention of the world's press with their very first ‘classical music video’. With Epicgram both partners want to demonstrate how important classical music is by bringing it into our daily lives. To create The Soundtrack of Our Lives so to speak.