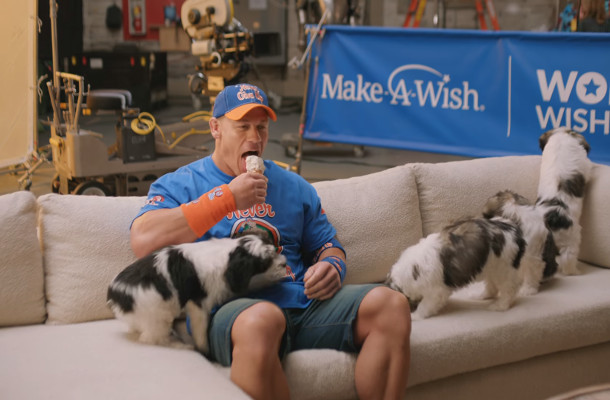 Make-A-Wish - the global organisation that creates life-changing wishes for children with critical illnesses – is soon to launch a month-long campaign in celebration of World Wish Day on April 29th, the 38th anniversary of the wish that inspired the founding of the organisation. The theme of this year’s campaign is ‘It takes More than Magic, It Takes Muscle’.

The organisation launched a PSA starring WWE Superstar and heavyweight wish granter John Cena, who has granted a record 580 wishes, including a voiceover from celebrity wish granter Johnny Depp.

Below is the World Wish Day Countdown video, featuring John Cena (and and a voiceover from wish granter Steve Harvey).

And here is the full PSA:

The purpose of the campaign is to highlight how wish granting can provide the mental strength kids need to fight their illness as well as honor donors, doctors, volunteers and other supporters who, together, lend their muscle – whether it be their time, energy or resources – to make wishes possible.

The campaign aims to grant as many wishes as possible this month and will culminate at the end of April, when Make-A-Wish makes a new GUINNESS WORLD RECORDS official attempt. In fact, many wishes were granted both in front of the camera and during the creation of the PSA. The PSA stars Make-A-Wish kids, including a superhero, mermaid, pop star, marine and astronaut.