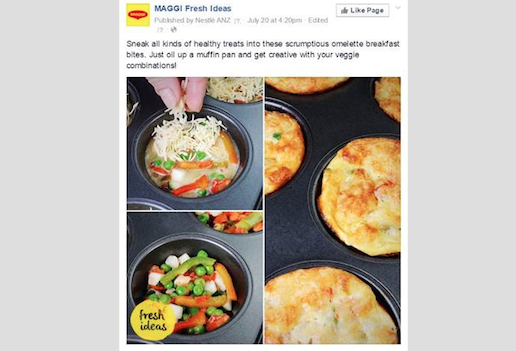 MAGGI has exceeded all digital targets for the first half of 2015 thanks to a multi-faceted campaign that has been developed in conjunction with its digital partner, The White Agency, and includes a refreshed website design and targeted social media activity.

The website and social media campaign have attracted a new league of followers thanks to a revitalised content strategy designed to engage consumers through beautiful recipe imagery, cooking tips, how-to videos, lifestyle advice, and Q&As with cooking and nutrition experts.

“We recognised that in order to achieve our goal of being the must-have meal-time companion we needed to create engaging content in easily digestible formats,” said Sibon Schouten, head of marketing - Foods, Nestlé. “But most importantly it needed to be delivered via online platforms as that’s what our target audiences are regularly consuming.”

Since the digital campaign began in January this year, MAGGI’s Facebook site has recorded a total reach of more than 6 million impressions and an engagement rate over one per cent (well in excess of the international FMCG benchmark of 0.33pc defined by Social Bakers).

“The success of the digital campaign has been largely driven by the ability to deliver content that followers have wanted to share,” said Chase Gunning, senior strategist, The White Agency. “This has further extended the reach of the MAGGI brand and attracted thousands of new customers.”