Mad[Wo]Men: The Rise of the Female Creative

Read the whole 14 page story in the latest Campaign Brief magazine, out soon 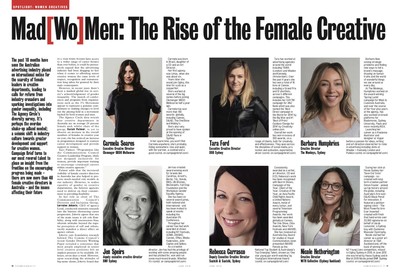 The past 18 months have seen the Australian advertising industry placed on international notice for the scarcity of female leaders in creative departments, leading to calls for reform from industry crusaders and sparking investigations into gender inequality, including The Agency Circle's diversity survey. It's perhaps the overdue  shake-up adland needed; a seismic shift in industry culture towards greater development and support for creative women. In a 14 page article in the upcoming issue of Campaign Brief magazine we turn to our most revered talent to glean an insight from the frontline on the encouraging progress being made - there are now more than 40 female creative directors in Australia - and the issues affecting their future.

In a time when women have access to a wider range of career futures than ever before, it could be persuasively argued that the advertising industry had been dragging its feet when it comes to affording senior creative women the same levels of respect, recognition and remuneration long taken for granted by their male counterparts.
However, in recent years there's been a marked global rise in society's acknowledgement of gender inequality. The launch of conferences and programs from organisations such as the 3% Movement appear to represent a genuine commitment to making changes to level out the playing field in a movement backed by both women and men.

The Agency Circle data reveals that creative departments in Australia are on average 29 percent female and, whilst chair of the group, Sarah Palmer, is yet to observe an increase in the overall numbers of females in creative year on year, she has noticed an increase in programmes designed to nurture career development and provide support to women.
Says Palmer: "Programmes like the Communications Council Creative Leadership Program, while not designed exclusively for women, provide important training to encourage continued careers within creative agencies."
Palmer adds that the increased visibility of female creative directors in Australia has also helped to promote much-needed role models in our industry. However, to realise equality of gender in creative departments, she believes agencies need to deliver on their commitment to providing flexibility.
In her role as chair of The Communication Council's Diversity and Inclusion Group, Lorraine Jokovic, CEO of agency Loud, conducted extensive research into the barriers obstructing career progression.

To receive this issue SUBSCRIBE NOW TO CAMPAIGN BRIEF @ only $40 per year.