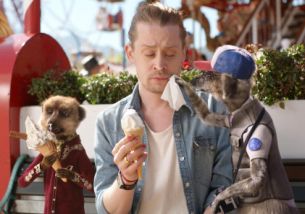 Comparethemarket.com has today revealed Macaulay Culkin as the latest star to feature alongside meerkat favourites Aleksandr and Sergei. The new Meerkat Movies advert will premiere on TV tonight, as Macaulay joins the fury pair on a road trip in a family RV across America.

Following in the footsteps of Hollywood giants Nicole Kidman and Arnold Schwarzenegger, Aleksandr decides Macaulay Culkin would be the perfect fit to complete their family-friendly day out. As the meerkats are seen pulling up to greet Macaulay, they are surprised to find he is no longer the 8 year old child star they were expecting. “He’s a lot bigger in real life!” whispers an awkward Sergei to Aleksandr as they peer out of the RV to find road-trip-ready Macaulay eagerly awaiting their arrival.

Not put off by the now 35-year-old’s demeanour, the meerkats are seen taking a less than impressed Macaulay to the fairground. Their adventure comes complete with roller coasters, a bouncy castle, Ferris wheels, and the parent-like dab of a hanky when Macaulay is enjoying an ice cream. The family fun culminates in a trip to the cinema as Aleksandr puts his 2 for 1 Meerkat Movies cinema ticket to good use.

Aleksandr Orlov, said: “During road trip across Americas, Sergei and I decide to have family day out. Only trouble was, we don’t have a family. So we decide to invite hottest Hollywoods child actor of the moment. Together we have great day at fun fair and use meerkat movies to go to the cinema. It was magicals.”

The latest ad with Macaulay Culkin comes during a period of family blockbuster releases including Finding Dory, Pete’s Dragon and Ice Age: Collision Course, which are set to hit our screens in the coming summer months.

The full 40 second advert, featuring Macaulay, Aleksandr and Sergei, will be making its debut on TV screens from 8th July on ITV at 7.45pm.