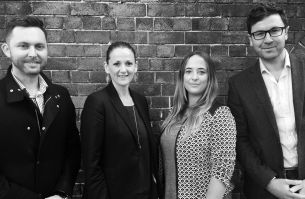 Good things come in threes and m2m has announced the hiring of three senior members of the team; James Parry joins as Business Director, Tarryn Blackwood joins as Head of Social and Dan O’Brien joins as Head of Digital.  The previous digital and social heads Dan Hills and Emma Glazier returned to the UK to allow Dan to start his PHD, while James’s role was created as a result of two new business wins earlier this year: Sony Pictures Releasing and Destination Canada.

James Parry – Business Director - moves to m2m Sydney from London with over 15 years’ experience, having worked for a number of boutique full service agencies and larger agency networks.  His most recent role was as Executive Director at OMD International in London, managing Hilton Hotels, Foot Locker and Destination Canada’. James will head up Sony Pictures, Destination Canada and The Star.  James was happy to announce, “I’m excited to have joined this dynamic, fast growing agency - one which through its BIGSmall positioning represents a compelling new offering for clients”.

Tarryn Blackwood – Head of Social - also moves to Sydney from London, where she gained 8 years’ experience in Social Marketing across a number of global FMCG and fashion brands.  Tarryn’s last three years were spent as Senior Account Director on Mondelez where she led the team in strategy, content ideation & creation and campaign & community management. Tarryn said of her appointment, “I am excited to be on the media side of the fence, which means being able to bring together the best creative with the most effective media, and doing this seamlessly for clients. I believe this is a very exciting time for both the agency and the industry, and I’m looking forward to growing the social offering with the team here."

Dan O’Brien – Head of Digital – has over 9 years agency experience working across several of Sydney's leading independent media agencies.  His most recent role was at GAD for Frontier Australia, heading up strategic planning & media buying for a variety of global and local brands such as Lendlease Property Group, Calvin Klein & The Australian Turf Club. Dan commented, “m2m's positioning as a big small agency is what has attracted me to the business.  Considering how competitive the media agency landscape has become, with very little differentiating one media agency from another, the ability to service clients well at a local level but tap into global resources positions the agency well for continued success. I look forward to being a part of the team.”

Wendy Gower, Managing Director of m2m Sydney said of the three new hires, “We are delighted to announce the appointment of these 3 key roles within m2m Sydney.  The m2m business has experienced significant growth over the past 2 years and with the capabilities within the m2m management team as well as across the broader business we are hoping to continue on this trajectory”.