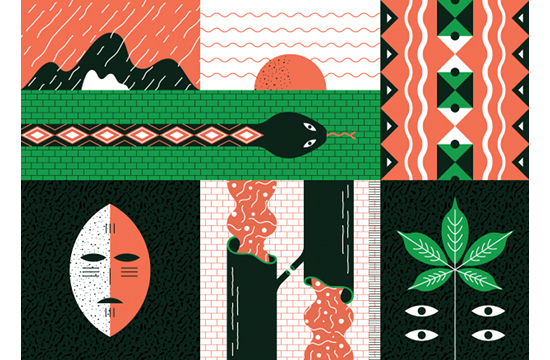 Lynx, the UK’s number 1 male grooming brand from Unilever UK  has launched a new digital campaign to celebrate 18 years of its longest running fragrance, Lynx Africa. The campaign, which uses the strapline ‘18 Years, 18 Artists, 1 Iconic Fragrance’, is being managed by TMW.

To celebrate Lynx Africa’s coming of age, the brand will release 18 pieces of original artwork inspired by the product’s cultural heritage. A diverse range of artists has been commissioned as part of the campaign, including renowned graffiti artist INSA and Simon Milner from IS Tropical. The final piece of work will be chosen from entries made by fans via the brand’s social media channels and showcased on the last day of the campaign.

Hosted on a custom-made Tumblr, a different piece of artwork will be released each day for 18 consecutive days. Kicking off the series is UK-based illustrator Andrew Groves, followed by Simon Milner. The campaign will run until 30th November, when the winning entry will be released. Once the final piece of work has been uploaded, Lynx will make the Tumblr theme available to fans and users of the platform. The campaign precedes a planned new look for the fragrance in 2014.

David Titman, senior brand manager, Lynx comments: “Collaborating with talented original artists is a great way to celebrate 18 years of the legendary Lynx Africa. We also wanted to make sure that our fans had an opportunity to get involved with the campaign and so decided that the final piece would be from one of them. We have a lot of exciting plans in 2014 and Lynx Africa will be leading the way once again as the Lynx range gets a new look.”

The campaign can be viewed here: LynxEffect.com/Africa18