Lynx Extends Make Love Not War With A 'Peace Invasion' 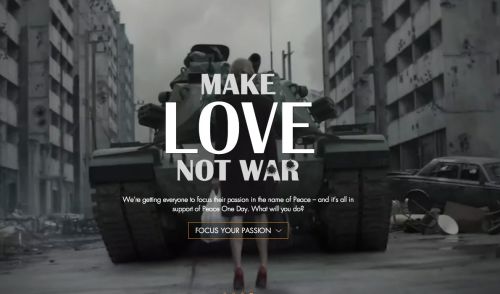 Lynx, the UK’s number one male grooming brand from Unilever UK, has launched a multi-million marketing campaign in support of the latest addition to its range.

The Lynx ‘Make Love Not War’ campaign encourages fans to embrace peace in every aspect of their lives. Using the iconic phrase as inspiration, it centres around three key passion points:

- Make Beats sees one of the UK’s most successful music producers, Naughty Boy, bring together three leading artists for one exclusive track, all in the name of peace.

- Make Threads sees five up and coming designers** create peace inspired t-shirt designs. The Limited Edition Lynx Peace collection will be sold by online fashion retailer ASOS with all net proceeds from the range donated to Peace One Day. The t-shirts will be available from 6th May 2014 whilst stocks last with an RRP of £10 each.

- Make Moments sees Lynx team up with Young Photographer of the Year, Matthew Lloyd, who has experience in capturing tension and conflict in war torn countries and the UK. For the campaign Matthew scoured the UK and Ireland to capture local heroes who bring peace to their communities and made them the stars of the images. The collection will be released alongside an Instagram competition, which tasks entrants to capture what peace means to them using the hashtag #LynxPeace. 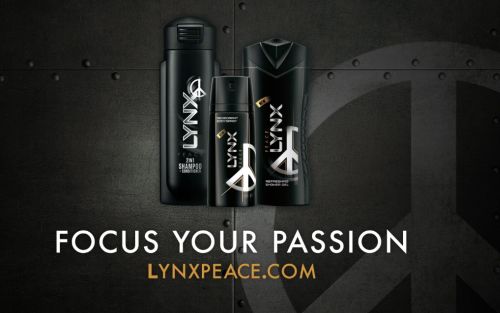 The UK wide peace invasion saw London’s iconic Tower Bridge adorned with a giant peace sign, while further down the river a huge water projection took place in front of The London Eye. Over ten cities, including Edinburgh, Manchester, Bristol, Brighton and Sheffield*, saw the imposing symbol projected onto key iconic buildings, acting as a message of peace to locals as they passed by.

Even rock royalty got involved, with Glastonbury showing its support with a giant peace sign chalked into the land where people will be making music, not war, later this summer.

Back in the capital, London’s Leake Street, renowned for its street art, saw graffiti artist Smug create a peace inspired mural to show his support for the Lynx campaign and Peace One Day. Elsewhere, an impromptu display of solidarity at London’s bustling Trafalgar Square saw 200 people stage a sit in to form a giant peace sign under Nelson’s gaze.

In keeping with the ‘Make Peace Not War’ theme, Lynx also hit the small screen earlier this month with its latest TVC instalment, set to drive sales of new Lynx Peace. The TV advert will be on air until the end of May. As well as TV, OOH and digital, the £9m multi-media marketing spend comprises print, sampling and in-store.

David Titman, Marketing Manager at Lynx commented: “After sending someone to space in 2013, we wanted to push the boundaries even further this year – and what’s more ambitious than inspiring world peace? Aside from creating an amazing new fragrance, we wanted to inspire our guys to focus their passions into something positive and helping to raise awareness for Peace One Day, a campaign we are hugely proud to be part of.”

Jeremy Gilley, Founder of Peace One Day said of the campaign: “Through our partnership with Lynx, we hope to raise awareness in an astonishing amount of young people, and awareness of peace is everything. Awareness inspires action, and action creates change. We're honoured that a brand like Lynx, which reaches millions of people each year, is supporting us to inspire and empower a new generation of peacemakers.”

For more information about the Lynx Peace campaign and how you can get involved, visit Lynx Peace and for further information on Peace One Day visit their website here