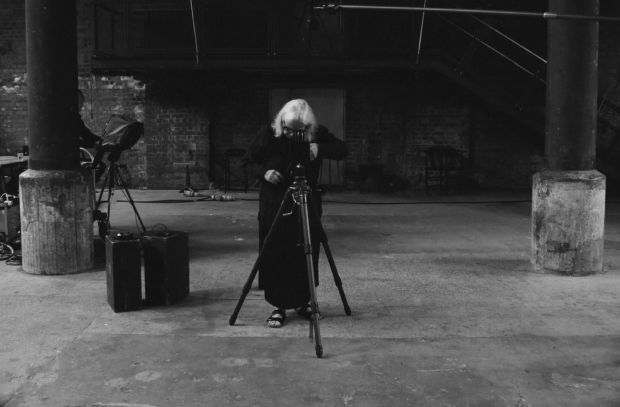 A vast hydraulic factory in London is the site for a special kind of production. One of the world’s foremost portrait photographers, Brigitte Lacombe, is having her own documentary portrait made about her, there. While she candidly discusses her life and ideas with filmmaker Lynne Ramsay, we see Brigitte’s intimate process at work: the graceful movement from behind her camera towards the subjects she’s capturing. This cast includes her sister, Marian, and a series of other siblings, some related by blood, others by sheer love. A conversation about making images illuminates the film’s deep monochrome mood and Brigitte’s directing gaze. We look at her looking.

BRIGITTE, directed by Lynne Ramsay, is the 18th commission from Miu Miu Women’s Tales. The acclaimed short film series invites today’s most profound and original female directors to investigate vanity and femininity in the 21st century. Lynne Ramsay has been described by Variety as “the world’s greatest working filmmaker.” Her last feature, You Were Never Really Here, starring Joaquin Phoenix, won Best Screenplay and Best Actor at the Cannes Film Festival 2017. Ramsay’s previous film, We Need to Talk About Kevin, was the only British feature nominated for the Palm d’Or in official competition at Cannes 2011, as well as going on to win numerous prizes at the British Independent Film Awards, the London Film Festival and the Writers Guild of Great Britain. Brigitte Lacombe first made her mark as a photographer on the 1975 film set for All the President’s Men. Since then, she has created iconic portraits of artists, actors, and countless cultural figures. Notable are her long-standing relationships with Meryl Streep and Miuccia Prada, both of whom Brigitte has photographed numerous times.
“I hate having my photo taken. Brigitte was the first person who captured me,” admits Lynne. “She cast a magic spell. I wondered, ‘how did she do that?’” Originally trained as a stills photographer herself, Lynne says that when it comes to the documentary form, “I’ve never done anything like this before.” There’s a stripped back quality to BRIGITTE. “I want to show the artifice of the shoot,” Lynne reveals, “but I also wanted to cast characters that I’d cast in one of my films.” For Brigitte, who has been on-set photographer of the Miu Miu Women’s Tales productions, when Lynne approached her with the documentary idea, she says, “I absolutely wanted to be a part of it. And I always saw this as a collaboration.” BRIGITTE playfully inverts the question of who is directing whom. “I knew I wanted at the end to turn the camera on Lynne,” says Brigitte.
BRIGITTE gives a rare insight into this photographer’s creative rhythms, her obsession with human details, and how her lens articulates a way of relating to the world. A world rooted in family, sisterhood, work, sacrifice, and creative collaborations. Lynne Ramsay’s new episode for Women’s Tales premieres at the Venice Film Festival’s Giornate degli Autori on September 1st 2019, along with a screening of Shako Mako by Hailey Gates.
Lynne Ramsay’s new episode for Women’s Tales premieres at the Venice Film Festival’s Giornate degli Autori on September 1st 2019, along with a screening of Shako Mako by Hailey Gates.
CREDITS
Director: Lynne Ramsay
Collaborators: Brigitte Lacombe, Marian Lacombe
Client: Miu Miu
Production company: HI productions, Somesuch
Executive producers: Max Brun, Sally Campbell, Tim Nash, Sarah Pearson, Seth Wilson
Producer: Tom Gardner
Cinematographer: Tom Townend
Editor: Adam Biskupski
Music & sound designer: Paul Davies
Production designer: Laura Ellis Cricks
Costume designer: Sarah Blenkinsop
Casting: Lucy Pardee with Lynne
Colourist: Jean- Clement Soret
Dialogue Editor: Linda Forsen
Stills Photographer: Brigitte Lacombe
Behind the scenes: Marian Lacombe
Additional clothing provider: Miu Miu
Stills assistants: David Coventry, Taeyoung Kwon, Jordan Grant
Lacombe Inc.: Janet Johnson, Studiocat – Brigittelacombe.com
Post production: MPC
Film Lab: Cinelab London
Very Special Thanks to: Miuccia Prada
Special Thanks to: Verde Visconti
view more - Creative