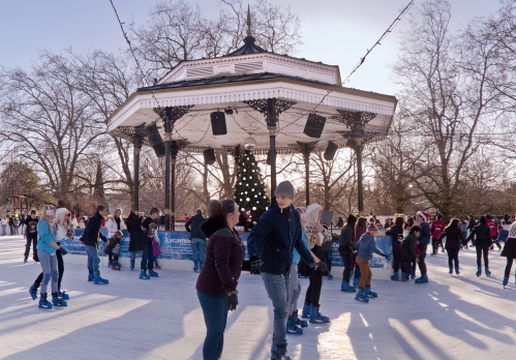 Lycamobile, the largest global provider of low cost international mobile calls, is delighted to announce it will return to Hyde Park Winter Wonderland this year as proud sponsor of its hugely popular seasonal ice rink.

Opening on the 21st November for six weeks, the Lycamobile Ice Rink will once again surround the historic Victorian bandstand, creating a beautiful centrepiece for Hyde Park Winter Wonderland. Stretching to 1600m2, it is the largest outdoor rink in the UK. In the evenings the ice rink will be transformed into a magical scene, as 108,000 pea-lights suspended above the rink will illuminate the ice.

Last year, Hyde Park Winter Wonderland attracted a stellar line up of celebrities and those spotted on the Lycamobile Ice Rink included Cara Delevingne, Kelly Brook and Liam Payne to name a few.

Organised by PWR Events, Hyde Park Winter Wonderland returns for six exciting weeks of winter festivities with FREE admission and even more entertainment and new attractions than before.

Founded in 2006, Lycamobile has fast become the global brand for connecting customers with their loved ones abroad at the cheapest possible rate. Providing low-cost high-quality international calls to over 12 million customers, Lycamobile has achieved greater coverage of the European population than any other network.

Lycamobile Group Chairman, Subaskaran Allirajah said: “After a successful debut in 2013, Lycamobile is extremely excited to return to the Hyde Park Winter Wonderland this year.  The Ice Rink is a prominent and much praised part of the event, enjoyed by many.  We are a business which celebrates community and are proud to be part of such a great London tradition.”