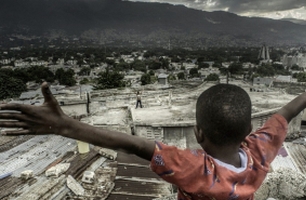 The Salvation Army Haiti was founded in 1950 and has been faithfully serving communities throughout the country for more than 60 years. To highlight The Salvation Armys ongoing commitment to the country, made deeper and more strident since the devastating earthquake in 2010, The Richards Group and a nimble production crew lead by Lucky 21 Director Jeff Bednarz, traveled to Haiti to film the Armys operations and the people touched by the organization. The result is a documentary that is as illuminating as it is moving.

The Salvation Army's Haiti Division is headquartered in Port-au-Prince, the country's ravaged capital, which is where the projects principal filming took place. Over 8 days they traversed rough roads and documented the people and places across the country that are connected by and to the Salvation Army Haiti. The Army, part of the fabric of the nation, oversees 48 schools serving nearly 12,000 students, a primary healthcare and nutrition center, a children's home, a hospital and dispensary, and HIV/AIDS programming.

"Everywhere we traveled beauty, pride in culture, and respect for community was abundant," recalls Director Bednarz. "We wanted to make a film that brought to light healing and empowerment inspired through their work. There are numerous challenges faced but the overarching feeling connected with The Salvation Army is one of hope. There are no shoulders slumped  theyve been working and helping side-by-side with the Haitian people for over 50 years. Ive worked on many projects for The Salvation Army and it was on this trip that the name Army resonated - they are fighting to heal, provide and protect. They are a truly amazing group."

Danny Bryan, Brand Creative, The Richards Group notes, "We weren't sure what to expect. But it wouldn't have mattered. The reality of life in Haiti is more extreme than what you can ever imagine. Not just in the amount of poverty and hunger and need, but in the amount of resilience and fortitude and hope. And The Salvation Army is right in the thick of it all. What we found through our interviews and observations is that The Salvation Army isn't there just fixing problems, they're helping empower an entire country, one person at a time.

As part of the project, Jeff Bednarz, DP Mark Thomas, and Art Director Ian Kasnoff took still photographs of the people they met on the trip. The portraits focus attention on the people they encountered on the unique trip, and will be on display at a gallery exhibition this spring. Proceeds from the sales of the prints will benefit Salvation Army Haiti and its unending mission to Do The Most Good.