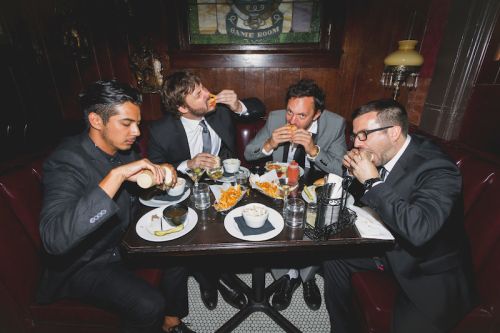 Luc Schurgers and Dominic Bernacchi today announced the official opening of their integrated production company Pet Gorilla. Based in Los Angeles, the house specializes in the new frontiers of interactive and traditional advertising/entertainment. Led by a dynamic team, Schurgers and Bernacchi are joined by creative directors Reza Rasoli and Bobby Lewis.

Although operating since the end of 2013, PetGorilla’s official opening has been delayed after a hectic first six months. In the short time that the shop has been established, their array of talents and skills has been thoroughly utilized. With ground-­‐breaking work for HBO’s Game of Thrones, art installations for NBC, an online interactive program to melt the hearts of potential dog adoptee’s (The Shelter Pet Project) and the award-­‐wining and on-­‐going Skype ReRouted.

“Dominic and I have worked together for the last three years. He is a vet in the production world having worked as an EP and rep for several renowned US houses (Digital Domain, Partizan, Radical media) and his knowledge of the US advertising world is exceptional. Like me, Dom’s a bit nerd, and we share the same ambition to bridge the gap between interactive and production.” Said Director and PetGorilla Founder Luc Schurgers. “We’re not your normal production company. It’s hard to define what we do and what we will do next – our name reflects that. We didn’t want to be overly cliché and conservative in our choice, and we needed it to personify all that we stand for and that we shall stand for in the future. PetGorilla is a contradiction. We’re a friendly bunch, capable of world destruction but also more than capable of a nice back rub”

“It’s time for something new in this business, there are too many tools at our disposal and for us to not embrace them would be an insult to creativity. I first met Luc when I was at Digital Domain and was interested in signing him to the Mothership roster. I was fascinated by his grasp on technology and it’s capabilities for creative expression. He understood the process from a fully integrated stand-­‐point and his energy was contagious”. Dominic continues, “Understanding how viewers or users embrace a story is important these days, technology has not changed the act of producing content nearly as much as its changed how people view it. At Pet Gorilla we’re still focused on traditional content production, but it’s the integration of film and animation into these new mediums where we find our true inspiration.”

Luc Schurgers is the founder of the production house MINIVEGAS, which he launched in London in 2005. The last decade has seen him direct under their moniker, creating award-­‐ winning commercials, music videos and interactive content. Pet Gorilla is a further expression of his dream -­‐ to work with good people and create great work. He has a unique understanding of storytelling and a recognized ability to capture comedy. Luc began his career within VFX and has a fascination with technology and real-­‐time solutions, these enable him to craft his work on a variety of canvases.

Dominic Bernacchi is the Executive Producer and Partner of Pet Gorilla. Before founding the company with Luc Schurgers, the pair worked together at MINIVEGAS with Dominic as Executive Producer in charge of the company’s US ship. Previous appointments include Mothership/Digital Domain, Radical Media, and Partizan. Dominic worked with a number of amazing creative talents throughout his career, and with an early start as an agency producer in San Francisco he understands the business inside and out. With a penchant for technology and a desire to push the limits of possibility Pet Gorilla is the perfect platform for his skills and talents.

PetGorilla is based in the Arts District of downtown Los Angeles. As well as representing Luc Schurgers, the company also reps the aforementioned Reza Rasoli, a former member of the directing team Three Legged Legs who was previously a creative director at Brand New School and Blind. Pet Gorilla’s other partner in crime is Bobby Lewis, a pupil of the famous Swedish directing collective Traktor, music video director, Wayne Isham, and previously represented by Partizan.