LRXD and Garbanzo 'Free the Falafel' in Restaurant’s Recipe Promo 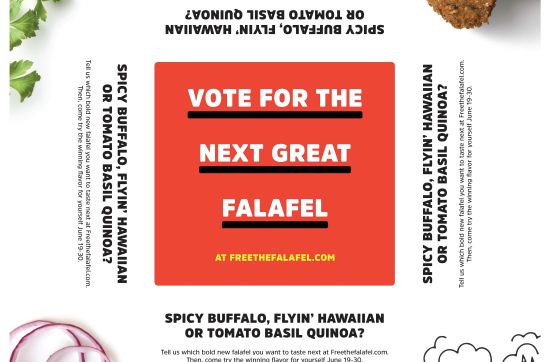 'Free the Falafel' is a two-part promotion. The first part is an introduction of three new falafel flavours (Sweet Potato, Red Curry and Jalapeño). Whichever falafel flavour sells best will be given away from June 12th through June 16th (starting on International Falafel Day). The second element of the promotion is a fan vote for the next great falafel flavour: Spicy Buffalo, Tomato Basil Quinoa or Flyin’ Hawaiian. There will be a poll on Facebook, with the winning flavour sold at Garbanzo from June 19th–30th.

LRXD created one 30-second radio spot that details the free falafel deal that runs from June 12th through June 16th along with a 15 second execution. Weekly email blasts will promote a free side of falafel with the purchase of an entrée. LRXD also designed in-store elements including window clings, table stickers, menu boards, sneeze guards, ceiling danglers, T-shirts and Free the Falafel kits.

“With Garbanzo, we’ve found tremendous success in unique promotions that evolve over the course of the promotional period,” said LRXD CEO Kelly Reedy. “We’ve found it encourages a tremendous number of repeat visits as a result of communicating something to look forward to.”

Garbanzo offers traditional Mediterranean cuisine, and “Free the Falafel” puts a contemporary twist on a popular menu item that’s simple, healthy, fresh, unique and versatile. Falafel can be incorporated into sandwiches, wraps and salads, and the garbanzo bean-based nuggets are also vegan and kid friendly. The promo’s key dates are as follows:

May 22nd: Sweet Potato falafel introduced. Consumer voting begins on Facebook for a new, fourth flavour of falafel. The winning flavour will be available for purchase the week of June 19th.