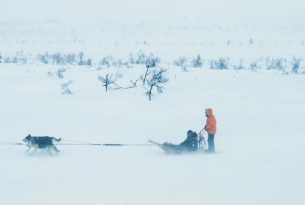 Knorr explores the power of flavour in its new short film, ‘Flavour of Home’, launching today. According to research, for many, the flavour of certain foods has the ability to transport people back to the comfort of home and the meaningful moments in their lives.

Created by Lowe and Partners, and directed by Oscar nominated and Sundance film award winner Nanette Burstein, the short film, “Flavour of Home”, tells the story of a mother’s journey across the Arctic to surprise her daughter, Carmen, with a homemade meal cooked just like when Carmen was a child. Culminating in a touching moment, it reveals that the greatest flavour on earth is the taste of home.

Also, involved in the development of the “Flavour of Home” film was Hungry man production company and post-production by Absolute. The two and a half minute film is available to view on Knorr’s owned digital channels, including on YouTube and Facebook, and will be supported by a digital strategy, including paid media, developed by Edelman and PHD. Additionally, it can be seen online via video distribution networks.

Jon Affleck, Knorr’s Global Brand Director says: “We believe life should be full of flavour, and what better flavour to celebrate than the taste of home. We were keen to capture a true and authentic story that brings to life how flavour is so much more than just taste; it’s about emotion.”

The sentiment in the film is substantiated by new research commissioned by Knorr.  It found that people, regardless of how much time has passed, still find their mother’s cooking to be one of the greatest flavours on earth. In fact, three quarters (75%) agree that just one mouthful of their mum’s home cooking is enough to bring happy memories from childhood.

Around the world, 82 per cent of people say that the taste of some foods remind them of childhood  while more than three quarters of people (77%) agree that food is always a part of life’s most meaningful moments.