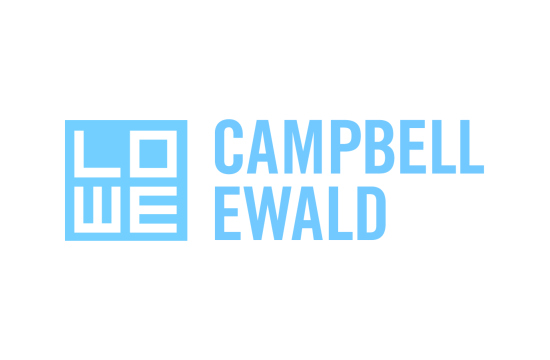 Effective immediately, Jim Palmer will assume responsibility as CEO. Kathleen Donald, the agency’s current President, will become Chief Operating Officer, taking on additional management responsibilities. Following the successful collaboration that led to the recent win of Cadillac, Campbell Ewald will join Lowe, serving as the U.S. hub for the Lowe and Partners Worldwide network, and will be renamed Lowe Campbell Ewald.

“These are exciting developments in the evolution of Campbell Ewald that position the agency for the future and place it on the global stage,” said Michael I. Roth, Interpublic’s Chairman and CEO. “Jim Palmer has been a key driver of client growth at the agency for some time now and recently led the IPG team that won the Cadillac assignment. He’ll be a strong CEO for Lowe Campbell Ewald, working alongside Kathleen, Chief Creative Officer Mark Simon and a cohesive senior team.”

Mr. Roth added that the formal linkup between Campbell Ewald with Lowe “brings a strong, full-service U.S. agency together with a global network led by Lowe Chairman Tony Wright and CEO Michael Wall. We saw the power of this combination in the Cadillac win, as well as on other recent international client work. Jim and his leadership team are highly supportive of this new relationship as they can continue delivering high-quality, full-service marketing to existing U.S. clients, with access to new global talent and distribution channels. Lowe Campbell Ewald will serve as the network’s primary partner and standard-bearer in the key U.S. market. Other IPG domestic agencies that have been working with Lowe, such as Deutsch, will continue to tap into the network on certain international client engagements, as long as these do not conflict with Lowe Campbell Ewald clients.”

Mr. Roth concluded, “Bill Ludwig is leaving the agency poised for growth. We wish him well and thank him for his many contributions to the agency over a 31-year career, including putting in place a new generation of management that understands contemporary integrated marketing and the digital landscape.” Mr. Ludwig is at work on an exciting new chapter in a storied career, which could see him remain connected to IPG. This new venture will leverage his combination of business leadership and creative talent, and details are expected to be announced in the near future.

According to Mr. Wall, “This is a great opportunity for us to keep building momentum with an agency we’ve had success partnering with in the past few years. They have strength across the full range of marketing channels and, as our organizations worked closely over the past three months preparing for and winning the Cadillac brief, led by Jim and Tony, we came to the realization that this is an alignment that makes too much sense for us not to pursue.”

“This is a great honor personally, but above all it’s a terrific opportunity to continue building our agency with a group of senior executives who have been together for some time and whose focus has always been on doing what is best for our clients,” said Mr. Palmer. “When you add to that the potential of representing Lowe in the U.S. and partnering with such a great global network, then you realize that this is a big day in the history of our agency.”