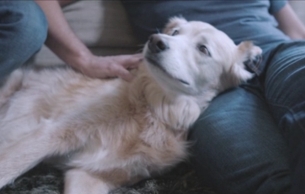 Great Guns director Frankie Caradonna spent a weekend back in September traveling around the UK filming families who had adopted pets from Battersea Dogs & Cats Home.

Established in 1860, Battersea Dogs & Cats Home aims never to turn away a dog or cat in need of help until new loving owners can be found. They champion and support vulnerable dogs and cats, and are determined to create lasting changes for animals in our society. Since its inception the home has rescued, reunited and rehomed over 3million dogs and cats. The film follows the stories of real life Battersea Dogs & Cats Home adoptees and their loving owners, and focuses around their new campaign ‘Who Needs Who’. We meet Jack, who was diagnosed with alopecia and his dog Teddy who he credits with ‘saving his life’, we watch the joy Boris the dog brings to the King family and we see the love and companionship Leila brings Barney who suffers from depression.

The film highlights the fact that both the owners and the adopted Battersea pets receive friendship and benefit immensely from each other’s mutual support and care.

The campaign was created by Benjamin Wight and Jennifer Craven (also known as Ben & Jenny), a creative team at a top London agency, who are so passionate about animals they worked in their spare time, as a personal project for free, to get the idea made. They wanted to create a different kind of animal rescue ad. Something different to the 'black and white feel sorry for me' spot that everyone is used to, and instead empowering the animals to show that in fact, rescuing an animal is a two way street.