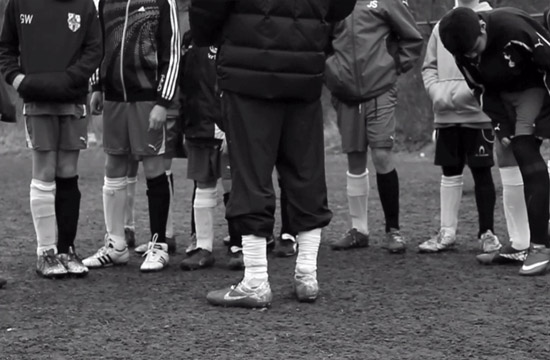 As the professional game wrestles with a series of ugly incidents and allegations of racial abuse, start-up agency Johnny Fearless has launched a timely social campaign to get youth and grass roots players to make a stand against racism in football.

2SOX1GOAL is a grass roots movement built around a simple but symbolic act – wearing one white sock and one black sock to show that colour doesn’t count in football. Johnny Fearless has put the social media channels in place, and unveiled its own online video, to capture the momentum and outrage that real football fans and players feel toward the racist incidents that have marred the professional game.

The two-and-a-half minute film ‘2SOX1GOAL - Love Football, Lose Racism’ launches on the 2SOX1GOAL YouTube Channel this week: http://www.youtube.com/user/2SOX1GOAL and, in parallel with the Facebook page: http://www.facebook.com/pages/2sox1goal/299372426758135) acts as a call to action to youth and Sunday League teams to join in and post their own videos.

The stylish black and white film opens with the text “Racism still exists in football. If the adults can’t sort it out...” before cutting to slow motion footage of youth football and the white sock, black sock idea in action, all set to the hymn ‘Abide With Me’. In the final frames, the film flicks in to colour and we see a muddied black and white sock together on the pitch with the endline “Love Football. Lose Racism”.

Paul Domenet, Founding Partner at Johnny Fearless, says: “2SOX1GOAL is designed so that anyone can show that colour doesn’t count in football. A kid in the park or a Sunday League wannabe can be a running, jumping, heading, shooting symbol of integration in football - one white sock, one black sock, that’s all it takes.”