Loud&Clear’s Campaign For Sportsbet Puts Sledging Back On Top 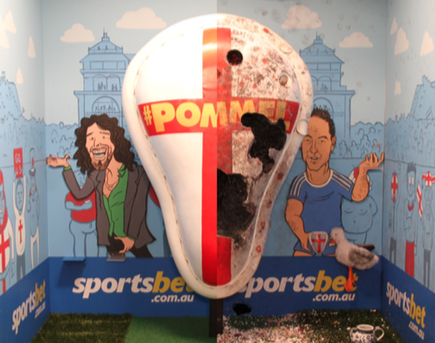 Loud&Clear’s most recent campaign for Sportsbet.com.au was a smashing success. Sledging poms – taking the piss out of poms in a humourous way – has historically been the privilege of Australian cricketers, who are known for bowling exceptional pearlers.

Sportsbet approached Loud&Clear with a plan to bring the banter back to The Ashes with a social campaign.

Together they created that outlet by hooking up a pair of bowling machines to Twitter and Facebook, which, when Fans registered a belting sledge – fired an actual, real life cricket ball at a Pommy cricket box piñata and gave them a chance at winning the $10,000 prize pool.

Australia sledged its heart out.

The Pommy box held in there, copping a battering for almost a week — 70,000 sledges in just under seven days — before it finally imploded just as the fourth day of the first Test was starting, making our lucky winner a whole heap richer.

The lucky winner – a passionate cricket fan from WA.