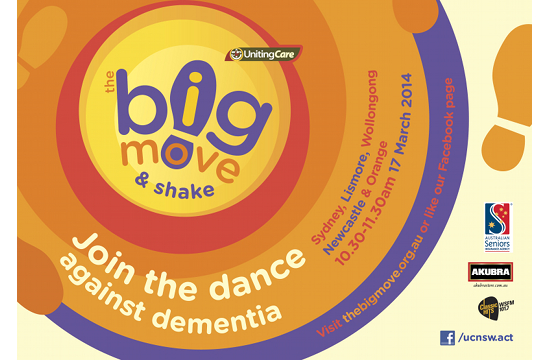 Lorraine Jokovic, CEO of LOUD, announced today the agency has won the UnitingCare account following a two-way competitive pitch, and will be responsible for UnitingCare Aging’s first launch titled ‘The Big Move’.

With changes in the Government’s approach to retirement, aged care management is one of the fastest growing service industries in Australia.  The Uniting Church is particularly active in this space through UnitingCare Ageing which is the single largest provider of aged care services in NSW and ACT. They support older people, particulalry those who are disadvantaged, vulnerable or isolated through in home care, independent living accommodation and residential aged care services.

LOUD has been tasked with creating a UnitingCare Ageing owned event for NSW Seniors Week.  Armed with knowledge of the latest research showing that using the heart and the head stimulates brain elasticity that is vital in warding off depression and dementia, the agency created The Big Move.

The campaign integrates traditional and digital media while showcasing Alana Patience from “Dancing With The Stars” fame as the campaign ambassador.  The campaign formally launches on 17 March with “The Big Move and Shake” exercise/dance event at Town Hall, Sydney.  Alana is integral to the campaign as the official event choreographer for the event.

Sandra Black, Director Communicaation and Marketing, UnitingCare NSW, ACT said, “LOUD came to us with an idea that was immediately identifiable as something that would work for us.  They crystallised and sharpened the thinking and work we had already undertaken coming back to us with a fully developed integrated campaign that had a clear lifespan beyond just 2014. This, as well as a clear plan on how it could be actionable in what were very challenging time frames, meant that they were the clear standouts.”

“The partnering of UnitingCare Ageing and LOUD Communications is an incredible opportunity.  The UnitingCare Ageing brand truly has the potential to be the No. 1 brand in this category.  The Marketing eam at UnitingCare NSW.ACT is forward thinking and innovative and together we can create genuine change in a sector that is often stereotyped as conservative and boring,” said Lorraine Jokovic.

“LOUD’s account management expertise complemented by amazing creative and production support resulted in a stand out campaign which quickly captured the hearts and minds of our target audience and beyond – and this is only the first year!” Sandra added.