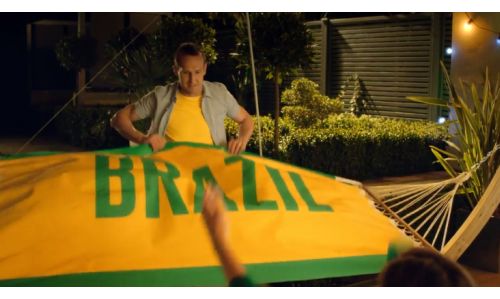 Tabcorp has launched a fully integrated campaign for the highly anticipated 2014 FIFA World Cup Brazil via its TAB.com.au brand. The campaign, featuring legendary Socceroo goalkeeper Mark Schwarzer, encourages people to ‘Back Gold’ by backing two teams – our very own Socceroos and hosts Brazil.

Created by Whybin\TBWA and TBWA’s Digital Arts Network (DAN) Sydney, the campaign includes five TVCs, which will be rolled out throughout the course of the World Cup. The ads were shot in London by renowned director Cristiana Miranda, who is no stranger to sporting royalty having worked with the likes of Lionel Messi, Jenson Button, Lewis Hamilton, Roger Federer as well as the Arsenal football team.

Schwarzer, who played 109 times in goal for the Australian national team, including two World Cups, will feature throughout the campaign and will also be giving punters his expert analysis on the form of teams during the tournament.

Commenting on the shoot, Schwarzer said, “The shoot was great fun to be a part of but my acting skills were definitely put to the test!” And commenting on the campaign he said, “It’ll be a little strange not being out on the park with the lads, but I’m looking forward to kicking back with my friends and family to enjoy what’s sure to be a brilliant World Cup. I’ll be supporting the Socceroos and hope they win, but it doesn’t hurt to have a second team to cheer on in the other games. With the World Cup returning to its spiritual home, who would bet against the Samba boys from Brazil lifting yet another World Cup.”

Julian Timmins, TAB’s Marketing Manager Sport, said, “We’re absolutely thrilled to have Mark on board for the World Cup. He’s a true legend of the game in this country. To have someone of Mark’s stature associated with the TAB brand is a great boost – he’s shown a real willingness to become part of the team.”

Adam Lee, Whybin\TBWA’s Group Head added, “Ideally, Australians will be supporting the Socceroos in the World Cup. However, backing a second team dramatically increases people’s excitement through the entire tournament. We want to encourage punters to back Brazil as their second team because they are sentimental favourites who play an entertaining brand of football... and, they happen to share the same colours as the Socceroos!”

The campaign will be supported in many other channels including digital, social, press, point-of-sale, CRM and radio. There’s also an opportunity for punters to grab a limited edition ‘Back Gold’ supporters pack from their local TAB in New South Wales and Victoria from next Friday June 13.