Loneliness in Lockdown: Deserted Streets Demonstrate the Need for Help 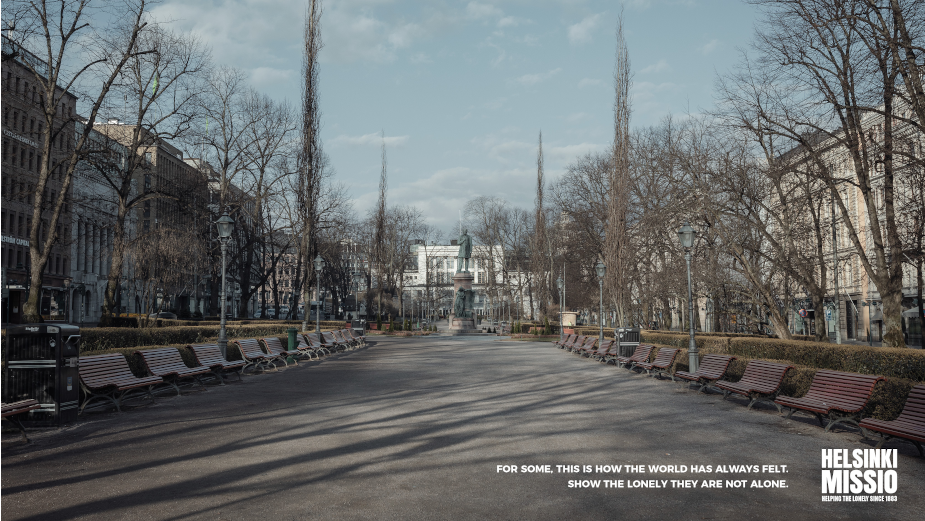 A Finnish NGO HelsinkiMissio demonstrates how the world looks like for the lonely through images of the deserted city streets of Helsinki. The organisation helping the lonely aims to highlight the issue during the crisis in hopes to get compassion for the ones who need it now more than ever.
Due to the Coronavirus pandemic, people have had to adjust to the new world of social distancing. For most, a life without daily human interaction is an entirely new situation. It is, however, nothing unusual for those suffering from chronic loneliness and isolation. Momentary solitude can be good for you, however, involuntary loneliness can lead to life-threatening health conditions.
The empty city streets inspired HelsinkiMissio to use pictures of deserted public spaces in their campaign to show how the world looks like through the eyes of the lonely, even without the ongoing virus outbreak. Loneliness is always harmful, it is never a choice of solitude. All of the images were taken in some of the busiest locations of Helsinki, the capital of Finland.
“We are now seeing pictures of deserted cities everywhere. They have turned into a post-apocalyptic art exhibition for everyone isolated at their homes. With this campaign, we hope that people will understand how the situation is affecting those who are already suffering from loneliness,” states Erno Reinikainen, creative director at TBWA\Helsinki. “In times like this, people need each other more than ever,” he continues.
HelsinkiMissio has been committed to helping lonely people in Finland since 1883. With its new campaign, it aims to get more people to help fight the battle against loneliness through actions of caring and compassion, donations or volunteering. The campaign was carried out pro bono together with TBWA\Helsinki, FLC Helsinki, Sanoma, and Clear Channel.
“We wanted to draw attention to the threat of loneliness that the current situation is causing to the population,” says Tuula Colliander, CEO at HelsinkiMissio. “What we’re now facing has already been a sad reality for many. We want to make sure that people who are now even more desperate for social interaction get help. It’s never too late.”
view more - Creative