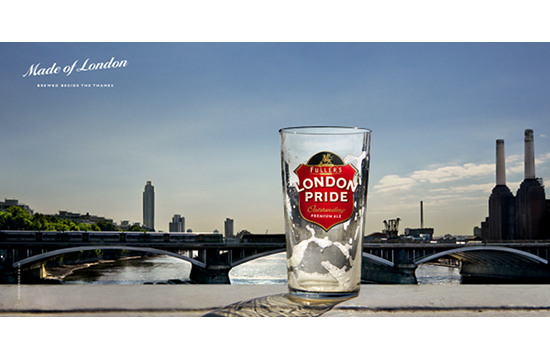 Following on from the success of the first phase earlier this year, London Pride continues to share stories of the brand to remind consumers of its rich history and heritage.

Entitled ‘Made of London’, London Pride has launched a new series of ads that celebrate the stories behind the beer and champion London Pride’s roots in the capital city.

The ads, which tell the story behind the beer’s griffin logo and the surprising tale of London Pride fans in the equine community, are the latest iteration in the brand’s hugely successful ‘Made of London’ campaign, which launched this summer. 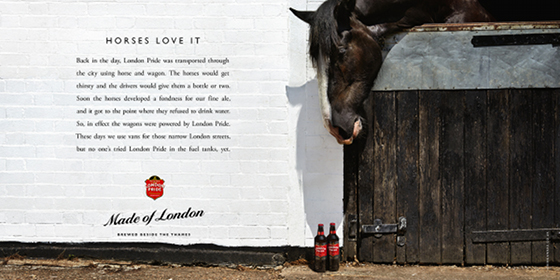 One execution in the second series tells the tale of the Fuller’s logo, the griffin who keeps a watchful eye over the beer from her perch high above the river Thames. Painted high on the brewery’s walls, the griffin has seen a lot of events on the Thames in her time, such as “77 Oxford wins” and “81 for Cambridge”.

Wade Crouch, Head of Marketing at Fuller’s, said: “Within this market, provenance is hugely important to people. We’ve been particularly forward in highlighting the brand’s history with our recent advertising campaigns and we wanted to continue to tell the fantastic stories that have made London Pride what it is today.

Despite being such a popular ale, consumers didn’t know the stories about the brand and these really resonated with our customers. One consumer wrote in and said our last campaign had brought a tear to her eye. And a lot of people didn’t know that we were still based in London. The brewery tour was fully booked for six weeks off the back of the advertising.”

The poster and print ads, created by The Corner, will run in press and outdoor sites across London from September 17th for two months. The outdoor ads will run on billboards as 48-sheets, 6-sheets and cross track in underground stations.