Awards and Events 260 Add to collection 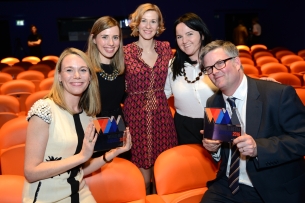 The winners of the first annual World Media Awards were announced last night at an exclusive VIP event held at The Ham Yard Hotel in London. The World Media Awards, launched by the World Media Group* give recognition to the advertisers and agencies that are creating the best international content-driven advertising campaigns in the world.

A panel of senior international media experts selected from major brands, agencies and media owners chose seven category winners and one Grand Prix winner from amongst the many entries that poured in from across the globe.

Mary McFarland, World Media Awards judge and Regional Director at Ogilvy & Mather, says, “These awards are extremely timely as they come at a moment when advertising is changing incredibly quickly and content, at the point where creative and media converge, is becoming the ultimate challenge – especially for international campaigns.

“The quality of entries was fantastic, creating a great showcase for brands big and small, consumer-facing and B2B, and demonstrating just how rich, effective and disruptive you can be with content. The London & Partners campaign was a well-deserved win, shining a spotlight on how authenticity and collaboration can create something really inspirational that speaks across borders.”

The winners of the World Media Awards 2016 are:

HSBC, 'The World is My Oyster', Mindshare Worldwide

Alex Altman, MD – Global Solutions at MEC and co-head of the judges, adds, “The first year of the World Media Awards has been better than we ever imagined.  They  have revealed the global stars that have grasped the complexities of international content-driven advertising campaigns, and provided a benchmark for others to aspire to. I have no doubt that next year we will see the Awards grow to be even bigger and better.”

Chris Gottlieb, Chief Marketing and Communications Officer at London & Partners, concludes, “It’s an incredible honour to win both the World Media Awards Grand Prix and the World Media Award for Travel & Tourism, especially given the quality of campaigns that entered from across the world. It was a privilege to showcase what London has to offer through the campaign with a spotlight on over 30 amazing experiences.

“We could not have done this without our superb partners across London and those celebrities and individuals who gave up their time to promote London as the greatest city on earth. I’d also like to pay tribute to my fantastic team at London & Partners, The Brooklyn Brothers and the Great Britain campaign for making London’s Official Guest of Honour possible, and showing just how powerful content can be.”