Awards and Events 572 Add to collection

Ogilvy picks up Network of the Year, while McCann Melbourne is named Agency of the Year 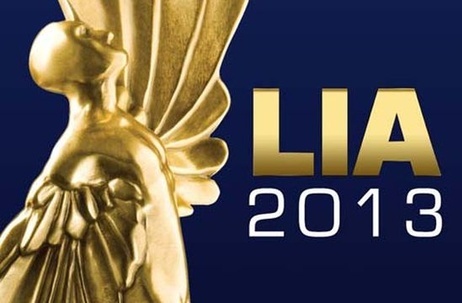 The 28th LIA judging was held at the Wynn/Encore Hotel in Las Vegas, convening over a ten-day period. The juries, led by their respective Jury Presidents, viewed and scored every entry within their medium ensuring that all the work was judged equally. They concluded with final discussions to determine Grand LIAs, Statue Winners and Finalists.

The following companies were honoured with the 2013 Of The Year Awards:

- Network of the Year: Ogilvy

This year seven Grand LIAs were awarded out of the potential fourteen.

With Jury President Mark Tutssel, Global CCO, Leo Burnett Worldwide leading the Non-Traditional jury they convened for four days to review and discuss all the Non-Traditional entries. After careful deliberation they shortlisted 89 entries, of these they awarded 27 Gold, 20 Silver and 19 Bronze LIAs. The jury chose Metro Trains - "Dumb Ways to Die” as the Non-Traditional Grand LIA for 2013.

“When you start digging deeper and really using your criteria for judgment there was one piece of work that did stand out and it was not only Non-Traditional in it's execution, it was an idea that completely captured the imagination of the planet. This idea was famous, it was incredibly famous and seen the world over and that was for Metro Trains “Dumb Ways to Die”, stated Mark Tutsell. He went on to say “And that is not to say that the other work was not equally as interesting, equally as thought through and executed within an inch of its life.  But this one piece just took it to the next level.  And some people will say it is predictable because obviously this piece of work has swept the award show circuit in 2013.  And the reason why, it’s the best and it's a piece of work that we can all learn from, that we can all be inspired by and it really sets a bar for modern day communication. And really demonstrates the power of music today.”

Nick Law commented, “Hardly any surprise that “Dumb Ways To Die” has got Best In Show, it’s a hard thing to argue against. It transcended our industry. It got out there, as both a charming narrative, but also a game, which is a very different thing. The ability to write a script, record a song, animate a video is very different to designing good game play and yet they did both at this level that transcended the industry. That’s a very hard thing to do, it’s like being hit by lighting.”

About awarding the Grand LIA, Amir Kassaei commented, “Is it true proof of what our industry can really develop and how we can impact society by producing something which is based on universal truth and is working globally and which is an entertaining piece. It's not advertising the way that advertising should be.  It is a great way of looking at communication in the year 2013. That is why I like it. It is the best piece of work that was done in 2013. In almost every category the juires appreciated and loved it.”

“We chose Southern comfort as the Grand LIA because it just cuts across the clutter and we felt it was very emotional, it's great storytelling, done with simplicity of form and it's told in the manner that you want to watch it again.” stated Khai Tham Meng. “I think it takes such a courageous client to buy this idea and I think the client needs to be awarded together with the entire team. The Jury felt that this was way beyond a Gold.  It is really setting a bar up really high. This was bang on strategy for Southern Comfort.”

ShootMedia, London was awarded the Grand LIA in the medium of TV/Cinema/Online Film - Production | Post-Production for ChildLine titled "It Follows Me Around". Jonathon Ker, Executive Producer/Partner, paydirt Productions, led the TV/Cinema/Online Film - Production | Post-Production jury as they waded through endless entries, of these they shortlisted 90 entries. In addition to the Grand LIA the jury awarded 9 Gold, 25 Silver and 25 Bronze LIAs.

About the choice for Grand LIA, Jonathon Ker stated, “This year we believed unanimously that the “ChildLine” piece outstood everything. Forgetting whether you know it’s a new young director or not, it was a beautifully crafted, beautifully filmed, beautifully acted, emotional piece that was very strong. “

Alexander Schill remarked, “What to say about this work that comes from our agency. I think it is a really cut-through thing to convince a big client to change a lot in the organization of a supermarket just to come along with a very nicely well-done good-looking piece of design that by the way is not on the classical piece of paper but using mobile as a technology. Using mobile as a technology, using fresh technology, it looks beautiful and it’s in contact with thousands of consumers, so it is a long-lasting piece of work that will be out there for a longer time then just being created for a one-shot.  Overall there were many things that made this piece a Grand LIA not only a good looking surface.”

The Radio Jury sat with headphones on for several days listening to each and every radio spot entered. The final discussions led by Jury President, Chris Smith, Group Creative Director, The Richards Group were well thought out and insightful. Together they shortlisted 119 entries, of these 87 were awarded metal; 34 Bronze, 32 Silver and 21 Gold. One went on to receive the Radio Grand LIA, Memac Ogilvy & Mather, Dubai for Sawa Mninjah - Rescue Radio - The Rescue Continues Campaign "Nepalese Street Festival", "Sri Lankan Health Spa", "Kenyan Romantic Drama" and "Filipino Pop Singer”. This is the first Grand LIA ever awarded to an entrant from the United Arab Emirates.

Chris Smith stated, “We gave the Grand to the one that saved lives. It’s been proven that they saved several dozen women who were in these situations who called and they rescued them. It was so brave on so many levels. It felt important, capital “I” important and it elevated our medium.”

“The ten convened juries had the option to award a Grand LIA in their respective media. The juries are instructed that a Grand LIA should only be awarded if the work is truly outstanding, ground-breaking and innovative.  It is a quite a feat to win a Grand LIA. McCann Melbourne’s three Grand LIAs for “Dumb Ways To Die” is truly impressive as it won across multi-media. Kudos to Memac Ogilvy Dubai for winning the first ever Grand LIA from the United Arab Emirates.  And congratulations to Wieden + Kennedy New York; serviceplan, Munich and ShootMedia London for winning the final three Grand LIAs,” stated Barbara Levy, President of LIA.

Of the 15,881 submissions, from 77 countries, less than 6% (5.5%) attained Shortlist status. Of those elite selections, only 0.7% won Gold Statues; 1.2% Silver Statues; 1.4% Bronze Statues and 1.7% Finalist. The vast number of submissions reflects the prestige and explosive growth of the London International Awards since its inception in 1986 when only 2,600 submissions were entered.