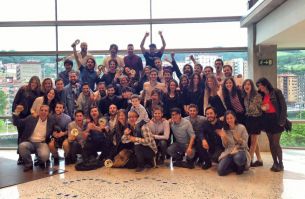 LOLA MullenLowe won a total of 23 awards (including 7 golds) with 11 different campaigns across 11 different categories for key brands including Magnum, Cornetto, Mattel, and Libero.  Pancho Cassis, Executive Creative Director of the agency in Madrid comments: "To be awarded Agency of the Year for the second time is a tremendous joy and the fulfilment of an ‘impossible’ dream. In the last three years so much has happened, people and accounts have come and gone but it’s wonderful to see the same hunger and drive to do the best possible work."

Magnum, “Be True to your Pleasure”, the short film that recognizes what it means to be true to yourself, and your pleasures. The work captured transvestites openly celebrating their true pleasures while enjoying their Unilever Magnum ice-creams; their bold testimonies reinforcing the idea that pleasure has more than just one layer.

Libero, “Football Memories FM”, a campaign that showed how talking about football helps people with Alzheimers and other forms of cognitive impairment, to improve their memory, attention span, and mood. An online radio was created to turn frequencies into memories, so patients could listen to games as far back as the 50’s.

For Scrabble, “Christmas Anagram”, a charming Christmas story of a family during the holidays, showing connections through anagrams and revealing how there’s magic in words.

Nomad, “Road to Tokyo”, an introspective journey about the future of skateboarding by Brazilian documentary filmmaker Nixon Friere. Road to Tokyo tells the story of skateboarding’s hope of becoming an official Olympic sport in the 2020 games, through the eyes of skaters who support the cause and some who don ́t.

· GOLD, Magnum, ‘Be True to your Pleasure" in Integrated Campaigns by LOLA MullenLowe

· GOLD, Magnum, "Be True to your Pleasure” in PR: Marketing Communication and PR Events by LOLA MullenLowe

· BRONZE, Deliveroo, “Instamats” in Media: Better Use of Print Media by LOLA MullenLowe

· BRONZE, Deliveroo, “Instamats” in Branded Content: Best Innovation in the Use of Distribution Channels by LOLA MullenLowe