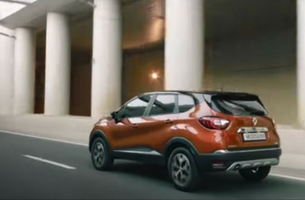 Renault launches the Captur, its stylish new SUV with cross over DNA. The CAPTUR’s distinctive expressive styling makes it an instant head-turner, and a refreshing change in the category. It also brings the best from Renault’s global product range to India. The longest and widest car in its category, the Captur’s striking design is enhanced by premium & class-leading features.
Specially designed with dual tone colour combinations in mind, it comes with a range of exclusive themed personalisations. This is accentuated by CAPTUR’s signature Innovative Lighting System and state of the art technology like the One Integration which intuitively connects the car and driver.
Mr. Virat Khullar - Head of Marketing, Renault India said, “We are one of the youngest Auto brands in India….and understand that today’s new India with its evolved sensibilities appreciates and demands nothing but the best.The Captur, with its stunning design epitomises class and will excite this evolved Indian consumer. Through the campaign we wanted to add a new dimension to the world of SUV’s… that of “India’s most stylish SUV”.
The campaign to communicate the launch of the car was created by Law & Kenneth Saatchi & Saatchi.
The ad film has been directed by Matthias Berndt and features Ranbir Kapoor.  It showcases the Captur’s irresistible style and looks, with movie star Ranbir Kapoor getting mesmerised by the Captur.
Kartik Smetacek - Executive Creative Director, Law & Kenneth Saatchi & Saatchi said “From the moment we saw the Captur at the factory in Chennai, we knew its looks were the big story. So the task for the film was to showcase the car, while using Ranbir to add charm and memorability.”
Vivek Kumar Duggal - Senior Vice President, Law & Kenneth Saatchi & Saatchi says, “The Captur with its refined good looks exudes a sense of style and sophistication. Our film, sought to highlight this through the effect the car has on our brand ambassador…himself a veritable style icon.”
The Captur is available in Diesel and Petrol and introductory price starts at 9.99 lakh ex-showroom price all India.
view more - Creative