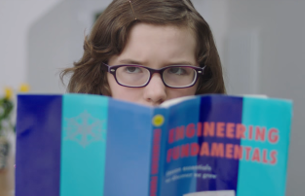 Girlguiding, the UK’s leading charity for girls and young women, has today launched a ground-breaking marketing campaign - #ForTheGirl - to challenge outdated perceptions and encourage people to think twice about the charity.

Following Girlguiding research which shows that 70% of 11-21 year old girls say sexism is so widespread it affects most areas of their lives – the film highlights the barrage of negative voices girls are exposed to every day through the media, and promotes the charity’s role in raising girls’ aspirations, building their confidence and tackling inequality.

The campaign directly targets women aged 25-34, both as strong role models for the charity’s young members, and as a key demographic both for future volunteers and parents of girls who might join the charity.

The innovative film was produced with youth marketing agency Livity – and was co-created with young people.

The film shows a series of apparently positive scenarios for girls – but when the girls turn to camera or speak to each other, the voices that we hear are not their own. Instead we hear the voices of familiar media personalities offering a negative or sexist commentary on an aspect of female identity and their role in society.

The concluding line of the film spoken by a young girl – “We don’t have to listen to that, you know” – demonstrates how Girlguiding equips girls with the building blocks they need for modern life, to positively change the world around them. Several of Girlguiding’s members acted in the film.

The campaign film will launch on several channels including Unilad’s popular Facebook page (from 15.00 on 2 November).

Girlguiding’s Communications Director, Becky Hewitt, said: “We know that some people still have outdated misconceptions about Girlguiding. This campaign is about challenging those perceptions, celebrating our commitment to empowering girls, and shining a light on the modern, diverse and exciting charity that we are today.

“Girls tell us that everyday sexism impacts all areas of their lives. We know that their happiness and confidence is declining as they face persistent gender stereotypes in the media, sexual harassment in schools, constant messages that their looks are the most important thing about them and a fear that they are not safe either out-and–about or online. But it’s clear that girls themselves are calling out inequality whenever they see it, and as the leading charity for girls and young women in the UK we stand with them in saying they deserve so much better.

“#ForTheGirl highlights the level of sexism and inequality girls face in their day-to-day lives and via the mainstream media, and reminds them they don’t have to accept it.

“We are calling on everyone to join girls in challenging sexism whenever and wherever they see it – to build a fair future for girls everywhere.”

As part of the campaign, Girlguiding is calling on high profile figures and members of the public to share the film on social media to show their support #ForTheGirl.