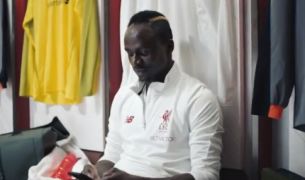 The world is on the move. People cross borders for a host of reasons. Some move to fill real deficits, such as highly-skilled expertise or service jobs. Some, to reunite with families. Others, to study abroad. A minority move to protect from conflicts or natural disasters. The UN predicts that the global migrant population will likely reach 274 million by 2020.

Western Union, a leader in cross-border, cross-currency money movement, knows that when people move, a trail of exchange follows: money, goods, services, and technology. Western Union processes 32 transactions per second with its services, connecting people and companies throughout the globe and it believes that when money moves fluidly, good things happen. A child goes to college. An uncle enjoys his nephew’s global stardom at home. A business expands. Emergency aid arrives at the moment it’s needed. Whole nations thrive.

The company’s ability to move money around the world allows its customers, including people like Sadio Mane and his fellow international teammates at Liverpool FC, to connect back home, meaningfully.

In this digital age, Western Union’s advantage starts with people and, with the support of BBH Sport, the company captured a real-life exchange of Liverpool FC’s Sadio Mane sending money to his uncle in Senegal via the Western Union® mobile app. His uncle Sana buys himself a lovely new wide screen TV to watch his nephew in action.

Shot between Dakar, Senegal, and Melwood, the Liverpool training ground, the ad shows Mane’s use of the Western Union mobile app, sending money to his uncle swiftly, successfully and simply illustrating Western Union as a global digital brand.

Western Union is the Official Principal Partner and the Official Money Transfer Partner of Liverpool FC. They are also the Club’s first-ever Official Shirt Sleeve Sponsor - with the Western Union logo emblazoned on LFC shirt sleeve.

Western Union’s partnership with the club allows the brand to benefit from a diverse range of Liverpool Football Club marketing and promotional rights. BBH Sport will work Western Union and LFC to bring to life the money transfer brand’s offering via the Premiership football club’s multiple platforms.

“Sadio (Mane) is really close to his uncle Sana who lives back in Senegal. It was fantastic to have them both in the film and show how Western Union helps them stay connected”.

“Moving money across borders is important for millions of people around the world (including quite a few Premiership footballers). Our digital solutions make moving money easier and BBH Sport have helped us use our partnership with Liverpool FC to tell that story in a highly engaging and relevant way.

The ad will air on UK TV for 4 weeks on Sky Sports & BT Sports, and globally online.