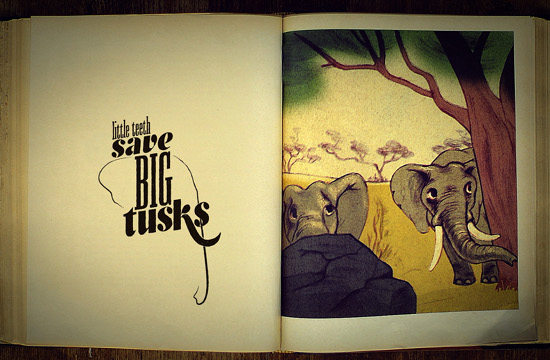 The campaign, which launches to the public on 7th September, consists of an animated film (hosted on Care for the Wild’s YouTube channel) featuring a beautifully illustrated story of how the Tooth Fairy is saving the elephants, a dedicated microsite that creates personalised thank you letters from the Tooth Fairy for children who donate their tooth money and experiential activity in the form of tiny tooth bags magically appearing in selected independent retailers and cinemas across the country. The journey is supported by a blog keeping the audience up to date on the latest news from the campaign and the wider poaching issue.

This campaign aims to educate the next generation of donors about the tragedy of ivory poaching whilst empowering them to do something good with their own baby teeth, ‘Little teeth save big tusks’. The creative appeals to this younger audience whilst connecting to existing supporters of the cause.

David Masterman, Creative Director JWT London, said: “It’s a sad irony that while elephants are being killed by poachers to make money from their tusks, in Britain we give our children money when their baby teeth fall out. We found that at that young children value animals more than money.”

Philip Mansbridge, CEO, Care for the Wild International commented added: “By concentrating on delivering a thought-provoking online experience, building the campaign around a much loved character and focusing on such a simple act of kindness, hopefully we can not only raise funds, but educate children of the issues at an earlier age, and inspire the next generation of supporters to safeguard our sustained efforts.”