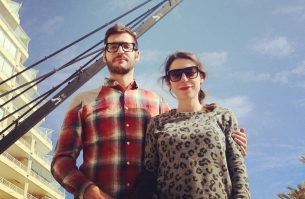 Production company Little Minx is excited to announce the addition of Los Perez to their growing team of gifted filmmakers. Los Perez comprises creative duo Tania Verduzco and Adrian Perez, a pair of multi-talented filmmakers famous for merging their interests in music and vibrant visuals for more engaging advertising.

Los Perez joins Little Minx after having written, directed, edited, and scored a variety of widely celebrated spots for numerous globally recognized brands. Their distinctly quirky, colorful, and comedic style has been sought after by Pepsi, Adidas, BBC, L’Oreal and others, bringing praise for their memorable characters and eccentric, heartwarming stories.

Their campaigns for Low Cost Festival and Chimo Bayo DXM were acknowledged as two Best Works in Spanish Advertisement by Club de Creativos. Further, the duo was selected to be featured in the SHOOT 2013 New Directors Showcase and turned heads by winning the silver awards at LIA and ADCE, as well as gold at the Laus Awards.

In their solo pursuits, Verduzco and Perez are formidable artists in a variety of media. Verduzco has earned substantial acclaim for her short films Pin-Up and Impact, with the latter winning her second-place in the Young Director Awards at Cannes Film Festival. Perez splits his time between film and music, acting as the lead singer/songwriter of the popular Spanish indie-rock band CatPeople, for which Los Perez directs music videos.

“Los Perez is exquisitely talented and we’re thrilled to have them on board,” noted Little Minx Founder Rhea Scott. “There’s so much vision and passion layered in everything they do and we can’t wait to see how their signature style and voice manifest next.”