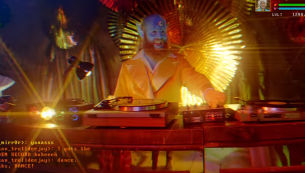 Directed by Jack Whiteley (Young Fathers, Spring King) and Joe Wills, the fantastically idiosyncratic visuals were shot at Allington Castle in Kent and feature the band in a disco-themed RPG alongside a host of suitably off-the-wall cosplay characters.

The single is taken from their brand new ‘Lover Chanting’ EP which is set for release digitally on 9th November with a special 12” black vinyl release scheduled for 16th November.

Wanting to play on the song’s strong disco roots, the directors note, “We felt there were some strong parallels to draw between the late-70s disco scene and the world of online role play gaming. Two worlds worshipped for freedom of expression, pure escapism and the ability to redesign yourself in any way you want. This is our attempt at creating a hybrid between those two worlds – a surreal online gaming environment and a heated 70s disco dance-off!” Meanwhile, in typical abstract fashion, Little Dragon divulge the following from the shoot... “Just an ordinary day in Bodin’s castle! Big hugs to director team Jack and Joe and of course all the party people! It was the most splendid day that Kent had seen in years. Sun shining over the rose garden with avatars lined up ready to lose their minds. Come full moon the disco was on. No turning back this time. Unless you level up!”

Following recent collaborations with BADBADNOTGOOD this year and extensive touring over the summer which saw the band co-headline Los Angeles’ near 20,000 capacity Hollywood Bowl and Berkley’s Greek Theatre alongside Flying Lotus, the band are currently on a run of performances in the US this October before bringing their undisputable, tightly-honed live show to London’s Printworks on Friday 2nd November in support of the new EP. Tickets for the upcoming Printworks show are available from here.