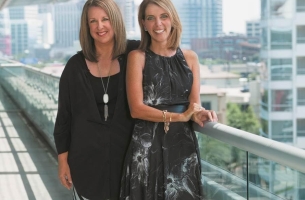 Lisa Bennett has joined TM Advertising as Chief Creative Officer, effective immediately. Bennett joins the agency as the new creative partner of CEO, Becca Weigman.  “Lisa’s track record for developing and guiding outstanding creative is clearly unprecedented. But beyond her fantastic work, she also brings the passion, energy and sense of humor that I was looking for in a partner. The day we met, I knew she was the one.” said Weigman.

“Becca and I had an immediate connection,” said Bennett.  “She is focused on all the right things - people, culture and building clients’ businesses with outstanding creative solutions.  We have the same philosophy, vision and desire to win.  Becca has hired an amazing group of people and I love the energy and the momentum at TM.  This is a place with tremendous potential and I’m thrilled that she chose me as her partner.”

TM has been on a growth trajectory having recently won Japan Airlines, March of Dimes and ZTE. Since Bennett joined the agency that growth has accelerated at an unprecedented pace. Within weeks of her arrival, TM pitched and began working with Raising Cane’s.  In addition, Bennett brought her Angie’s BOOMCHICKAPOP client into the agency as well as work with Yahoo.

“Like me, Lisa instinctually is a builder,” added Weigman.  “Together we plan to build TM into an agency that clients of all shapes and sizes want to work with and that the most talented people in our industry want to work for.”

Bennett has worked across a broad range of industries including Consumer Packaged Goods, Airlines, Retail, Cosmetics and Technology.  She has had creative oversight of iconic brands such as McDonald’s, Heinz, Delta Airlines, Intel, Clorox and ConAgra Foods. Prior to joining TM, Bennett founded her own agency and led the creative charge for e.l.f. Cosmetics and BOOMCHICKAPOP.  Her previous posts include EVP/Creative, North America for DDB, Chief Creative Officer of DDB’s San Francisco agency and EVP/ECD at Leo Burnett.

Burnett and her teams have been recognized with the highest honors across every major awards show, including Clios, Effies and One Show,  In 2013, she was named one of the Top 10 Most Creative Women in Advertising by Business Insider.  She has served on the international juries of Cannes Lions, D&AD, Communications Arts and One Show and was recognized as one of Ad Age’s 21 to Watch in the 21st Century.