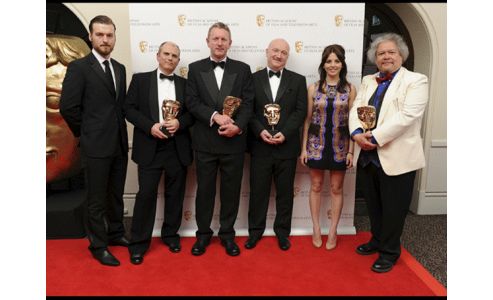 LipSync Post is delighted to have won a BAFTA Craft award for Sound-Fiction. The audio team won the award for its work on Steven Poliakoff’s acclaimed BBC drama Dancing on the Edge. The ceremony took place at The Brewery, East London, on Sunday 27 April 2014.

Robert Farr, Re-Recording Mixer, LipSync Post, said, “It’s an honour to win a BAFTA Craft award for our work on Dancing on the Edge. The project was a joy to work on, with all the challenges of a period drama as well as the wonderful music to mix in.”

Peter Hampden, Managing Director, The LipSync Group, said, “We’re so proud of our talented team, they always work tirelessly to create the best possible soundtracks for our clients, and this award is thoroughly deserved. We would also like to extend our thanks and congratulations to Adrian Bell, Lee Crichlow and Ian Wilkinson, the freelance sound recordist and editors who worked on the project alongside Robert and the team.”