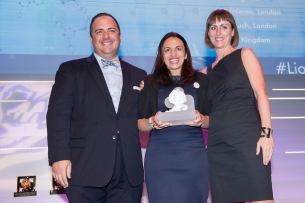 From the 432 entries submitted, 25 Lions were awarded in the Pharma section and DigitasLBI New York’s “Take it from a fish” for Astra Zeneca claimed the section’s first Grand Prix.

Commenting on the choice, Jury President Rob Rogers, Chief Creative Officer and Co-CEO, Sudler, said that the jury had been captivated by the standard of work, which he described as being of greater variety and quality this year and a sign that the competition had come of age.

The Grand Prix winner, he said, “blew the door off the category” and dispelled the myth that a challenging environment was a barrier to ideas. “Regulations don’t define creativity. Constraints can sometimes help creativity.”

“Even more incredible is the capacity for this idea to span women of all ages, and ultimately be passed down the generations. Always has managed to create a legacy by supporting this individual community, which in turn demonstrates the brand’s commitment to women the world over. A fantastic example of a brand that seeks to deliver life-changing creativity.”

61 Lions in total were handed out in this section, from a total of 1,430 entries.

The winner of the Young Lions Health Award, also launched this year in partnership with UNICEF and Unilever, was announced at tonight’s Awards Ceremony. The jury chose the team from Mr. President, Ryan Price and Cece Chu, for their ad ‘The Essentials’.

Finally, also announced were a series of Special Awards.

The Lions Health Grand Prix for Good – open to Gold Lion winning entries ineligible for a Grand Prix in their section – was judged by members of the Pharma and Health & Wellness Juries as well as representatives from the United Nations Foundation. Together, they chose FCB INFERNO London’s “This Girl Can” for Sport England.