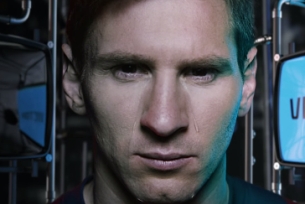 Lionel Messi’s tears are distilled and turned into chocolate bars of Sweet Victory and Bitter Defeat in a new film for EA SPORTS FIFA 15.

For players and spectators alike, football can trigger all extremes of emotions. Especially towards the end of the season when the stakes are high and emotions drive teams forward to a victorious end or their ultimate demise.

Marking the end of the season and celebrating FIFA 15, a new online film captures the emotions of football so players can not only feel the game, but also (virtually) taste it. Created by Wieden+Kennedy Amsterdam, the 90-second film sees Lionel Messi’s tears of joy and tears of despair collected and transformed into ‘The Bitter-Sweet Taste of Football’ – a dual chocolate bar with one side of Sweet Victory and one of Bitter Defeat.

Wieden+Kennedy Amsterdam Creative Director, David Smith, says: “Football is bitter-sweet. One moment you are crying the sweet tears of victory, and the next, you are crying the bitter tears of defeat. So what better way to show the emotion of football than to make a chocolate bar from the tears of Lionel Messi? A man who feels football more than any other man in the world."

Together with a team of engineers and industrial designers, Wieden+Kennedy Amsterdam created the machine through which the bitterest of dark chocolate, and the sweetest of white chocolate flowed. An actual, moving, spinning, 10-meter long installation complete with conveyor belt. Because when feeling the game is not enough, maybe you need to try your other senses and actually taste the game.

So as the football season draws to a close, will you taste sweet victory or bitter defeat?