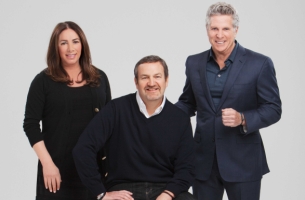 Deutsch today announced that effective immediately Mike Sheldon, CEO of Deutsch LA, has been named CEO, Deutsch North America overseeing both the LA and NY offices. He will be reporting to Linda Sawyer who becomes Chairman—succeeding Donny Deutsch and the late David Deutsch. Val DiFebo will continue as CEO of Deutsch NY and Deutsch LA’s Partner, Chief Operating Officer, Kim Getty is elevated to President of that office.

In planning for this transition Sawyer said, “Mike is the right person for the next chapter of Deutsch. In his 17 year run he has built strong client relationships, has an innate ability to attract top-tier talent and has built a world-class integrated agency. Under his leadership the LA office has grown from a handful of people to what is now the largest agency on the West Coast. Mike has big brains and a big heart to match. He is the epitome of a fearless leader.”

Sheldon noted, “I love this agency and the clients who put their trust in us day in and day out. Our business, like any other, depends on talent that can inspire better ideas and business results. Having LA plus Val and her incredible team in NY to tap into we can provide significant opportunities for our clients and employees.”

Donny Deutsch, who has been a non-active Chairman for the past several years, becomes Chairman Emeritus. He will formally end his relationship with the agency at the end of March 2015 as he continues with his TV career. Deutsch said of Sawyer that she "has been a formidable force at the agency for 25 years. And as CEO for the past nine years she has managed with an iron fist in a velvet glove, effortlessly guiding the agency’s growth and successes. I couldn’t be more proud and excited about the future of the agency that my Dad founded 45 years ago. This agency has been such a big part of my life and I’m thrilled to see it in the hands of these people who are so dear to me.”

“Deutsch is filled with talented individuals. To ensure that the agency brand is poised for continued growth, we are expanding the roles of two key executives to enhance our offering in North America," said Sheldon.

Winston Binch, Formerly Chief Digital Officer of Deutsch LA, Binch will become the Chief Digital Officer, Deutsch North America. Binch is a highly respected digital leader and has served as the agency’s engine of innovation. In LA he has built a team of 190 digital specialists in four years. As a result digital is now 35% of LA’s revenue.

Pete Favat, Formerly Chief Creative Officer of Deutsch LA, Favat will become the Chief Creative Officer, Deutsch North America. Since Favat’s arrival, he has attracted the most sought after talent in the industry and fostered work that has received global recognition, including eight Cannes Lions. He is a driver of innovation and creativity.

With Deutsch since 1992, DiFebo has been a cornerstone of Deutsch’s unprecedented growth. As Deutsch NY CEO since 2009, the office will continue to be run under her strong leadership. DiFebo also holds the global role on Johnson & Johnson’s Acuvue business, leading all of the IPG partner agencies.

Kim Getty, Partner and Chief Operating Officer of Deutsch LA, has been promoted to President of that office. With Deutsch LA since 2003, Getty has been responsible for helping manage its fast-paced growth trajectory, shaping the agency’s entrepreneurial culture as it has more than doubled in size. She’s also been the force driving new practices including experiential, public relations, and multicultural marketing.

Finally, Jeff White, SVP, Director of Business Development in Deutsch LA, is promoted to EVP, Chief Marketing Officer, Deutsch NA. Under White’s guidance over the past year the agency has been awarded AOR assignments from Sprint, Pizza Hut, HTC, Nintendo, Vivint and George-Pacific, among others.