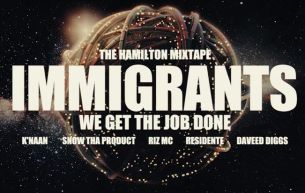 Grammy, Emmy, Tony, and Pulitzer Prize-winning artistic pioneer Lin-Manuel Miranda joins forces with Executive Producer Robert Rodriguez and breakout Director Tomás Whitmore of Diktator to create a stunning and timely music video for the hit song, “Immigrants (We Get The Job Done)”.
The video, filmed entirely on trains, uses conceptual and compelling vignettes to highlight various aspects of the immigrant experience. From cramped living quarters, to border crossings, Syrian air strikes to daily working life, we are immersed in the struggles of those seeking the promise of a better life.

“Immigrants (We Get The Job Done)” from the chart-topping Hamilton Mixtape album, was released in December of 2016 by Atlantic Records, and appropriately features performers K’naan, Residente of Calle 13, Riz MC, and Snow Tha Product, all of whom penned their own verses expressing their individual perspectives on immigration.
Understanding the responsibility and scope of the subject matter, Tomás Whitmore, along with Producers Kimberly Stuckwisch and Melora Donoghue worked meticulously to elevate the project from a typical music video to a thought-provoking and socially conscious narrative.
“To make a film that empowers and honors the migrant narrative in an inclusive manner has been nothing short of transformative for everyone involved,” Tomás says.  “Our hope is that the film can convey the notion that human mobility is the cornerstone of human history, and ultimately, act as a reminder that we are all on this journey together.”
Striving for visual authenticity to match the narrative, the team handpicked Cinematographer Drew Bienemann and Production Designer Spencer Graves, who explored the visual concept through the use of light and shadows cast amongst captivating set builds. Each carefully crafted vignette transports the viewer through a never-ending train while simultaneously raising the question, “Where are they going?”
As the song closes, the train emerges atop a CGI earth on an endless loop, brought to life by visionary VFX company Giant Propeller. This poetic image reinforces the concept that movement is human history and that immigration is not just a topic for today, but part of an ongoing story that began with the pursuit of Life, Liberty and Happiness.
view more - Creative