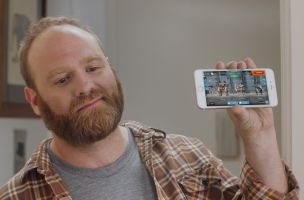 The 30 second spot, “Father’s Day,” opens on a man who eagerly plays “WWR” on his mobile in his living room. Upon hearing a loud explosion sound coming from upstairs, he peeks in on his teen son, who stares at him with a “what?” look while appearing to study from a notebook. The father nods and returns to his gaming, only to hear another loud noise coming from his son’s room. This time, he barges in unexpectedly to catch his son in the act of playing “WWR” on his iPad instead of studying. Realizing they’ve found a common interest in the game, the father-son duo then bond over playing together.

As part of the marketing effort, Pixonic also shared inspirational real-life stories from fathers and children on its company blog to show that games are truly capable of bridging generations, regardless of age, with “Walking War Robots” as a particular favourite amongst family members. The online campaign has proven especially popular on Facebook, where dads have come out in droves with positive comments and conversations about the work. The Moscow-based mobile game developer’s flagship app, best known for its ability to support 6 vs. 6 team battles in real-time, recently passed the 15 million mark for downloads.

“LightHouse Films and its staff showed the highest level of professionalism and politeness,” says Andrey Selin, Mobile Marketing Manager at Pixonic. “The production of the ad was as swift as it could be, thanks to them.”

LightHouse Films' Ray Zablocki directed the commercial with the company providing full-service production, including copywriting, casting, editorial and post. LightHouse Films was a natural fit for the project since it operates from the philosophy that close relationships between brands and production companies are imperative to maximizing the development of content for digital campaigns, such as this one.

“My experience working in various disciplines helped to streamline the creative process,” says Zablocki. “This means I can talk through the project with more ease and can appreciate what everyone else is contributing and bringing to the table. As a director, it’s great to work with LightHouse Films because of the freedom, support and resources they offer to develop such cool opportunities.”

Zablocki says that part of the fun with the “Father’s Day” spot was that conceptually, it’s such a stark contrast to the actual “WWR” game, which is set on futuristic city streets with robots fighting each other in a dark, dystopian storyline.

“We knew the fanbase would expect something darker, but working with Pixonic, we liked the twist of giving them something unexpected,” says Zablocki. “It’s simple, but mischievous and just the right amount of sweet.”

“We’re proud to represent diverse directors who can apply their special set of skills, versatility and creativity to each project,” concludes Thibaut Estellon, Owner/Executive Producer of LightHouse Films. “Ray once again demonstrated that he can deliver on pure live-action spots, while still bringing the fun and whimsy he’s known for in his stop-motion animation and motion graphics work. We enjoyed a very successful collaboration with Pixonic.”