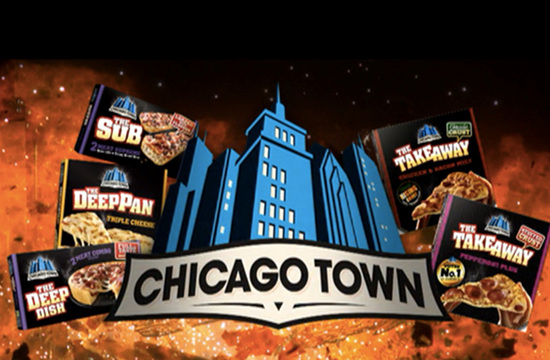 The activity, which kicked-off last night, runs until 31st March, includes two ads; a 30 second and a 10 second short. Promising ‘The Ultimate Pizza Hit’, the 30 second movie-themed ad introduces ‘the actors’ - all the best bits of Chicago Town Pizzas, including fresh dough, fully-loaded toppings and stuffed crust, delivered by the Chicago Town Swat team. In the spot, the Swat team airlifts a rival pizza boy from the front door step and substitutes a Chicago Town pizza.

The agency has also created a 10 second ad claiming that Chicago Town Takeaway pizzas were voted number one versus Domino’s. The ad features a promotion via the call to action ‘get real dominoes at chicagotown.com’, which encourages consumers to visit the website to agree with its number one positioning and sign up to receive a free pack of branded dominoes.

The TV campaign is being supported by teaser emails distributed to Chicago Town’s database as well as a push via social media. Consumers will be encouraged to ‘like’ the Chicago Town Facebook page, https://www.facebook.com/ChicagoTown, and agree that it is number 1 in order to receive their branded pack of dominoes. LIFE is responsible for devising and delivering the campaign strategy, and producing creative.

Paula Wyatt, marketing manager, Dr Oetker said: “We’ve pushed our ‘Ultimate Pizza Hit’ proposition to the next level with the latest Chicago Town Takeaway campaign. It’s big, bold and full of American attitude. LIFE has created a spot that builds desire for the product while providing a reason for consumers to engage with the brand in a fun and shareable way.”

Ian Humphris, managing director at LIFE, added: “Chicago Town is an adventurous brand that requires a ‘go large or go home’ approach to its advertising. This is why the movie trailer theme works so well, because it encapsulates the ‘big action’ experience of Chicago Town pizzas.

“We always approach our client briefs with intelligence first. As part of the background research, we carried out a study with Chicago Town’s core demographic to assess how the brand’s Takeaway range performs against competitor products. Chicago Town came out on top based on description, taste and price, providing the perfect platform to produce creative which guns for that number 1 spot.”