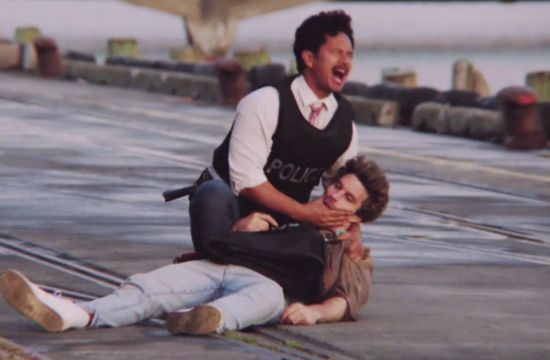 Maritime New Zealand’s new advertising campaign harks back to the glory days of 1980s cop shows to show that, like bulletproof vests, lifejackets don’t save people’s lives unless they’re worn.

The campaign draws on MNZ’s latest research, which shows that men aged 40 plus are the least likely to zip up on the water. Black humour and ‘80s TV show nostalgia are used to great effect, delivering the deadly message that having a lifejacket on board won’t save boaties or their mates if things go wrong.

MNZ’s Education and Communications Manager, Pania Shingleton, says too many men don’t realise this simple fact, despite the statistics showing that 90% of boating fatalities are men. “Being close to your lifejacket is like being close to your bulletproof vest – it’s just not close enough,” says Pania. “People think if they have an accident, they’ll have time to put their lifejacket on, but boating tragedies tell a different story.”

The TV advertisement, launched this Sunday, features two American buddy cops – complete with mullets and other ‘80s fashion statements – in a skirmish with mobsters on the docks. Brandon and Joe Bro have seen a lot of action together and, like many partners, have each other’s backs.

Joe Bro is wearing his bulletproof vest but, strangely, Brandon just carries his in one hand as they leap off a boat, take out a baddie, bust through a door and jump through a window. The closing scene sees Brandon shot by one of the mobsters while he attempts, too late, to put on his vest. Joe Bro is left holding his best mate as he breathes his last.

“The ad is a clever metaphor to show that, to save your life, lifejackets must be worn, not carried,” says Pania. “It’s also designed to appeal to men who think they’re bulletproof, and raise their awareness about the risks they face when they don’t wear their lifejacket.”

Research shows that boaties who wear lifejackets are more likely to survive if something goes wrong. About three-quarters of boaties who die in recreational boating accidents each year could have been saved had they been wearing a lifejacket.

IPSOS research, also commissioned by MNZ, into the impact of the ‘Don’t be a clown – wear a lifejacket’ campaign, found that 75% of boaties said they took some action after seeing the ad, and 29% said they’re now wearing their lifejacket on a regular basis. Pania says the new advertisement is aimed at encouraging older, diehard boaties to wear a lifejacket, and will also appeal to a younger generation.

Joe Bro, who survives the shoot-out in his bulletproof vest, will be MNZ’s summer safety ambassador in print, online and mobile advertisements. He’ll also appear on MetService’s new marine weather mobile app, also to be launched in December.