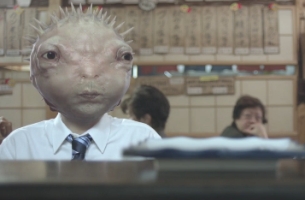 Framestore's LA Creative Director Ben West wrote and directed this his very own short film 'Fugu & Tako', which has recently been selected as both Short of the Week and a Vimeo Staff Pick after doing the rounds on the film festival circuit.

Ben describes the short as a buddy film about two Japanese salary men, whose lives are literally transformed when one of them eats a live puffer fish in a sushi bar.

Ben commented on the VFX behind the short: "We worked on Fuku & Tako over several months between commercial projects. We had a very small team of extraordinarily talented people. Our unwavering commitment was to the story, translating the detailed performance of the actor into a computer generated head became the primary goal. Skin texture, lighting, muscle systems and other technical feats to simulate reality ensured a strong foundation.

However, it’s the subtle yet detailed performance that really captures the imagination. The line between digital and real performance is being blurred. On Fugu I had the privilege of exploring the process in detail. In the end it’s about an instinctive understanding of human emotion required in both the acting and animation. The tendency is to go big but often less is more."