Life Aquatic: Behind the Scenes on giffgaff’s Sparkly Summer Campaign

Behind the Work 2.3k Add to collection

Editors' Choice: A swimmer soars through space in a cinematic spot that’s all about freedom, writes Laura Swinton 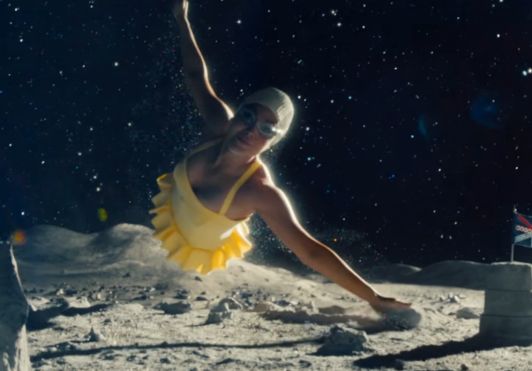 A woman in a canary yellow swimsuit readies herself atop a diving board, surveys the sunny lido below… and then launches herself into space to the oaky strains of the classic Walker Brothers track, Stay With Me Baby. The summery new giffgaff spot is a slice of escapism that almost defies description as much as it defies gravity.

Launching on Friday evening, the new campaign for the UK-based mobile network celebrates the concept of freedom with what giffgaff’s Head of Advertising, Abi Pearl, describes as ‘grown up magic’. It’s the brand’s most cinematic spot and, at a time of global turmoil, a welcome bit of whimsy.

For the campaign, the brand teamed up with creative agency Who Wot Why (led by trio Matt Gooden, Sean Thompson and Ben Walker) and Sean, who also directed the spot, brought his own insight as a giffgaff member to craft a story that celebrates giffgaff’s unique position as a community and a network that doesn’t tie users into contracts.

When I suggest that the spot reminds me of an unexpected blend of Gravity and Amelie, giffgaff Brand Director Tom Rainsford says that they wanted to find a way of portraying outer space in a very different way to recent blockbusters. “Interstellar and Gravity, because of their storylines, depict space as a cold place but obviously we didn’t want to do that. We wanted to depict the fantasy and wonder,” he explains.

That’s why Sean and the team decided to forego a purely CG approach to production and VFX, and instead blend real models. “I wanted to make something that was magical and theatrical, so the blend of old and new film techniques was massively important in ‘The Big Swim’,” he says. “I chose to use model making, enhanced by CGI, to give handmade charm and epic scale. The Space Station and Mars Rover were hand crafted in London and were delivered to the sets in South Africa, where the art department designed the full-size space station's nose and the lunar and Mars surfaces. The models were hand puppeteered on set.”

For the shoot, the team headed to Wellington in South Africa. “Normally we shoot in the UK,” says Tom, “but when you choose an idea set in summer, and it’s March... and while London Fields Lido sounds good…” He trails off laughing. Given the amount of time the actors had to spend splashing about in the water, they were undoubtedly relieved at the team’s decision to find somewhere slightly warmer to shoot the vintage outdoor swimming pool.

The team were also lucky enough to work with an actress skilled in wirework and martial arts, who spent hours at a time swooshing and soaring off the ground.

It was the team at The Mill who were tasked with pulling the live elements together and building a world that felt epic and intimate, and where the CG and real models fitted together like a dream.

“The use of CG allowed us to make the set feel more epic, being sure not to be constrained by any reality or physics. For instance, the arbitrary parallax on the stars and the planets help the swimmer to be part of this gigantic environment, and it also helped give a stronger feel of her speed and the distance she was going, as well as her magical trails giving us the feeling she was travelling through a unique world. By doing this we created a more intimate space, one that enhanced the charming and quirky feel to the spot,” says Mill VFX Supervisor and 2D Lead, Grant Connor.

Also involved in the shoot was Marshall Street’s John Mayes, who edited the spot. That was particularly important as it helped him craft a cut that enhances the spot’s sense of space and freedom, even in its cutdown versions.

The overall aesthetic of the campaign was brought to life by DP Tim Maurice-Jones and colourist James Bamford, who created the sun-drenched and sparkly look that’s infused with a subtle vintage glow.

In fact the giffgaff team were very particular about the imagery and aesthetic of the spot. They didn’t want to veer off into pastiche with their retro influences and were keen to ensure the spot remained fresh, modern and unique. “We’re quite fastidious about what we do,” says Tom. He explains that they also worked with a semiotics and insights agency, Sign Salad, to help get the details just right. The colour of the swimsuit, the casting of the bathers by the pool. ”Were we going too retro and beautiful? Were we being true to the brand?”

The idea of being true to the brand might surprise people who are only really familiar with the zombie-filled Halloween spots that giffgaff is known for. But the true core is a sense of community and of playfulness. Plus the team has a carefully curated bible – the Lovely Book of giffgaff – that serves as a touchstone for what it puts out there. Even the decision to set the spot at a lido was important, explains Abi, as it feeds into the brand’s community ethos.

“It’s playful, but just in a different way. It’s fun and important to give different aspects of your personality. Brands are like people – they’re diverse and complex,” says Tom.

And playful it certainly is. Magical too. And perhaps the most magical thing of all is that, despite all of the thought and care and hard work that went into making the ambitious campaign, the experience of watching the ad is like the easy bliss of a summer’s day.

Song: “Stay with Me Baby” by The Walker Brothers