Behind the Work 266 Add to collection 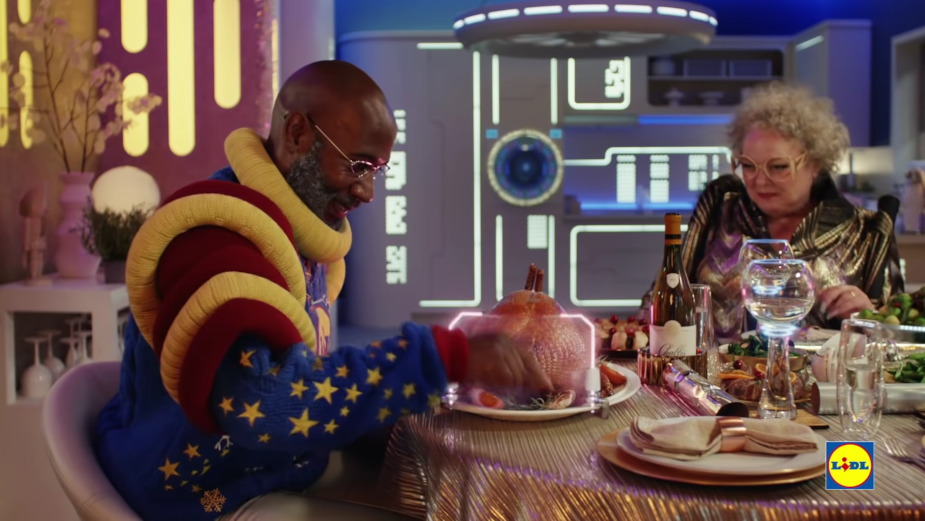 Lidl’s Christmas campaign creative directors, Luke Ramm and Joe Holt from Karmarama speak to LBB’s Nisna Mahtani about their take on a futuristic festive gathering
This year, we aren’t dwelling on the past, instead we’re looking forward to the future in Lidl’s festive campaign. Sat around the Christmas table are all the usual suspects: a girlfriend who’s trying a little too hard, Uncle Gary who recites the same unfunny dialogue every year, Mum asking too many questions and a dog, looking longingly at the spread on the table. It’s safe to say that we definitely recognise the characters and they’re spot-on.
As we’re taken through the campaign, we’re introduced to a laser turkey carver, a fingertip camera and some incredibly festive, boundary-pushing, Lidl themed jumpers. The notion of a near, middle and far future give us a Lidl sense of what’s to come.
Not only does the ad capture the essence of Christmas gatherings, but it displays Lidl’s Christmas range of food while also reminding us the supermarket will ‘always be Lidl on price.’ Claire Farrant, marketing director at Lidl GB, says, “After a challenging couple of years, the nation wants to look forward not back, which is why we’ve set our light-hearted ad decades in the future.”
To talk about the idea behind the campaign, the process of creating it and even the adorable puppy-intern on set, Karmarama’s creative directors, Luke Ramm and Joe Holt spoke to LBB’s Nisna Mahtani.

LBB> Evolving Christmas jumpers, futuristic turkey cutting and talking dogs - this Lidl campaign really did it all. What was the initial idea that sparked this creative direction?

Luke & Joe> There are two answers to this. The simple one, and the one we’d prefer you’d believe. Really, it stemmed from last Christmas. Everything went to pot. But we all put up decorations, ate chocolate before nine am, wrapped presents (even if they were bought for ourselves), and arguments with your Uncle still happened, just over zoom. Whatever happens, Christmas will always be Christmas, and that’s a pretty comforting thought.
The simpler answer: we haven’t seen a Christmas ad set in the future before…

LBB> We have to know, how did you go about creating all of the different Lidl jumper concepts? They’re fabulous.

Luke & Joe> There was a lot of back and forth with our wonderful wardrobe department, particularly about how we make that ‘middle’ future. That was one of the most challenging and interesting parts of this job, working out the difference between the ‘near’ and ‘far’ future. How big are the shoulder pads in the near future? Do too many rings of Saturn make the jumper too futuristic?
Setting the tone for the rest of the wardrobe of each era was about anchoring it in something we sort of recognise. Maybe Victoriana is around in the far future, maybe it’s all about Mad Max-style distressed leather. As with everything in this ad, making the future feel anything but cold was our guiding light, and the jumpers really helped this.

LBB> There must have been some fantastic conversations about all of the futuristic elements to include. Can you tell us about some of the wild ideas that didn’t make it?

Luke & Joe> There’s such a list. At one point, Oggy the Doggy had a pet of his own, an alien called Charles. He was playing haptic Connect 4 with him, at one point. Nan was a prolific potato thief, and she used a holo-portal to steal a spud from the past... We could have written a five-minute edit if we had the budget. 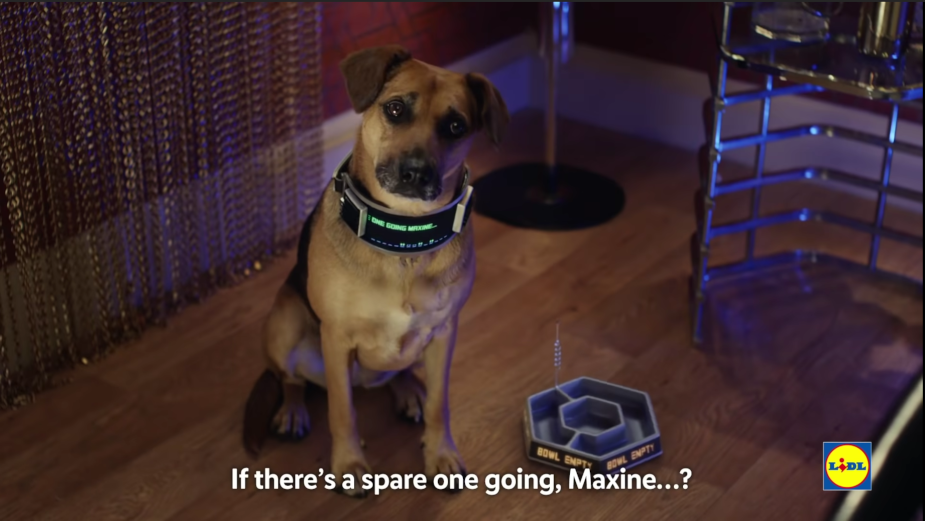 LBB> The repetitive script works so well with the concept of reliable, futuristic continuity. How long did it take to create and finalise the script that we hear on screen?

Luke & Joe> Gary brought so much to this project and was super passionate about retaining the ‘Groundhog Day’ feeling of the ad, and we’re so glad he was. The dialogue evolved like it always does, sometimes on set, sometimes over email, sometimes inspired by something someone said on a call. Uncle Gary’s ‘Spain / Moon / Forever’ line evolution is a personal favourite of ours, and his character is pretty key in nailing the very festive idea that our families may be annoying, but they’re ours and ours alone.

LBB> Gathering around the table is very reminiscent of a typical Christmas day. Where did you take inspiration from when it came to thinking up the characters?

Luke & Joe> Our own families. We’ve all got an Uncle Gary. Mum’s wide-eyed questions that always feel a little intrusive. Nan’s always on the brink. The new girlfriend that always tries a little too hard. And no, Uncle Gary wasn’t named after our director, that’d be very, very mean.

LBB> Rocking Around the Christmas Tree - a classic song to accompany a Christmas ad. Why was this your choice and were there any other contenders which were discounted?

Luke & Joe> Jingle Bells was on the table. An early plan was to create three original compositions, each getting a bit more ‘futuristic’ as we go. But once we put ‘Rockin’ Around’ on the edit, it just worked. Those recognisable intro bars really helped the reset every time. Big shoutout to Lidl, who recognised this was the right choice for the ad and pushed for it. 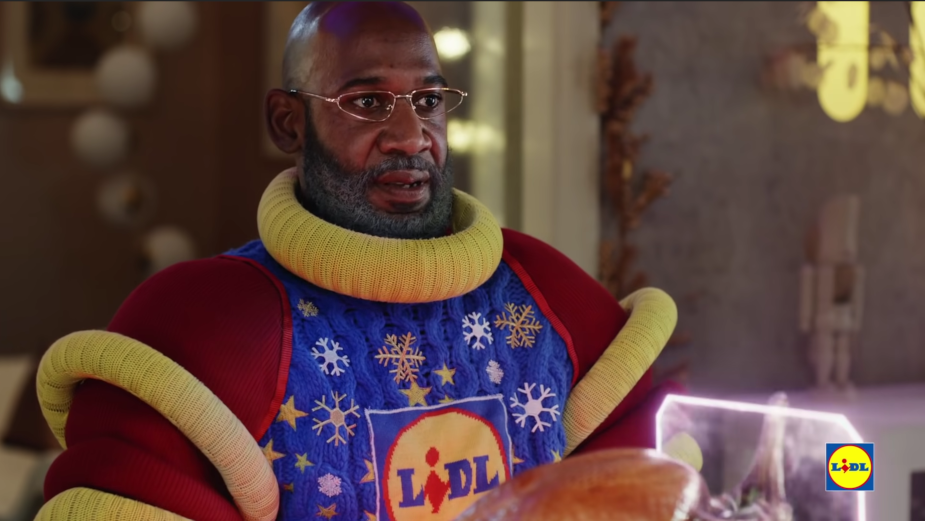 LBB> How long did it take to create this futuristic ad from start to finish?

Luke & Joe> It feels like we never stop on Christmas, as soon as one is over the next begins. In all honesty, we’ve already got a great idea for next year’s ad…

LBB> Were there any challenges or tricky post-production moments?

Luke & Joe> The post-production was a dream. Absolute Post were amazing. They clearly loved working on this project and brought so many fun, exciting ideas to the table. We had to keep one eye on making sure that the future felt as warm as the present, which is where the retro-futurist vibe served us well.
Our future tech all wanted to feel a bit kitsch, a bit unnecessary, a bit Jetsons. The future we ‘know’. The main challenge, with all this in mind, was to build that ‘middle’ future, keeping it warm, knowable, and not ‘too future-y’, as we had a whole other future to build!

LBB> What were some of your favourite behind the scenes moments and can you share them with us?

Luke & Joe> Oggy, our canine lead, was being shadowed by an intern for the shoot days she featured in - a four-month-old puppy who was learning how to behave on set. Safe to say she didn’t.

Luke & Joe> A message of thanks would go well here. Thanks to everyone that stuck with it, put in days and nights of work, brought passion and opinion to the table, and, most importantly, thanks to Lidl, who brought the idea, and ran with it.
view more - Behind the Work