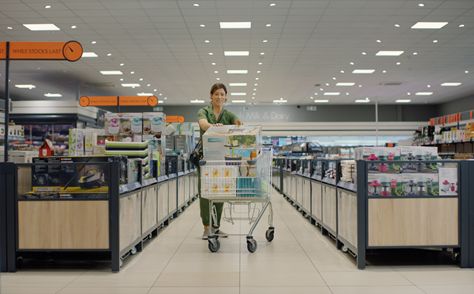 Lidl UK has premiered its latest advert created by TBWA\London. The advert will run from July 6th to August 2nd as a 30 second TVC.

The narrative of the ad tells the story of a Lidl customer waking up in bed, fully-clothed and heading straight to her local Lidl store to have a first glimpse at the new middle aisle products, which go on sale every Thursday and Sunday.

En route she mischievously turns the Lidl road sign to face the opposite direction, diverting all the other cars away from the Lidl store. Her objective is to keep all the new middle aisle quality products to herself, since they are such fantastic value and only available whilst stocks last.

Coming to a close, the voiceover reads: “There’s something new in the middle aisle of Lidl, every Thursday and Sunday” with the Big on Quality, Lidl on Price logo feature over the final shot.

The ad builds on Lidl’s previous ‘Big On Quality, Lidl On Price’ campaign, which demonstrates the range of quality items brought to customers at unbeatable prices.

Claire Farrant, Advertising & Marketing Director at Lidl UK, said: “Our middle aisles at Lidl provide our customers with a variety of innovative products at low prices that genuinely create excitement. Our latest campaign uses humour and the unexpected to capture the delight and thrill of getting your hands on these lifestyle products before anyone else.”

The ad follows the successful Kantar Worldpanel results, released last week, which show Lidl growing at its fastest rate for two years, with sales rising by 18.8% and an overall UK grocery market share of 5%.