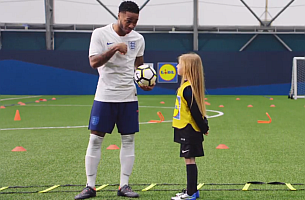 Today, Lidl UK, the Official Supermarket of the England football team launches its Dream Big with Lidl campaign, celebrating their three-year partnership and endorsement of the Three Lions as they prepare for The World Cup.
With support from agencies CSM Sport & Entertainment, TBWA\London, Starcom, 360i and GOAT, the campaign brings together both the supermarket’s backing of the England team and Lidl’s grassroots initiative ‘FA Lidl Skills’, which has created 3 million opportunities for 5-11 year olds to play football over the last three years.
TBWA\London has created a series of TVCs, which feature cheeky under-11s whom impart their wisdom to England footballers Gary Cahill, Kyle Walker and Raheem Sterling to help them succeed in the tournament.
In a partnership first for the brand, the players are featured in above the line content. This will be live across cinema, radio, social, broadcast VOD, online video and large format DOOH in key city rail stations and mall locations, including Waterloo and London Bridge, as well as featuring in cover-wraps, consecutive FPs and partnerships in print, delivered by Starcom.
Claire Farrant, Marketing Director at Lidl UK, said: “The TVC highlights Lidl’s involvement in grassroots football and how over the last three years, the FA partnership has provided 3 million opportunities for boys and girls from local communities up and down the country to play.
“With the nation’s attention now fully focused on this summer’s tournament, we wanted to use this as a chance to inspire the next generation of footballers with our ‘Dream Big with Lidl’ campaign.’’
Mark Bullingham, Commercial & Marketing Director of The FA, said: “This innovative campaign brilliantly combines football participation with the nation’s excitement around this summer’s World Cup –two themes at the heart of The FA. Our partnership with Lidl has allowed The FA to invest millions into the grassroots game and help ensure that football is a sport for all.”
TBWA\London’s Chief Creative Officer, Andy Jex, said: “England players come face to face with kids from FA Lidl Skills. In a tournament year it’s reassuring to at last see a bunch of footballers with swagger, brimming with ideas and full of confidence. Raheem, Kyle and Gary weren't on bad form either.”
With 77% of viewers second screening during matches, Lidl has created multiple real-time assets using the children from the TVC to amplify the campaign at key moments across the tournament. This reactive content sees the children remain at the centre of the campaign, with the launch of England’s Lidl team.
The concept saw selected FA Lidl Skills children announced as part of Gareth Southgate’s ‘new’ team in a spoof press conference video released last week, created by CSM Sport & Entertainment. The children’s journey sees them replicating moments that their senior counterparts will face, from boarding the plane to Russia, facing major on-pitch moments such as goals, cards and even the nerve-wracking penalty shootout.
In a media first for Lidl, content will also be used reactively in a sponsorship partnership with ITV and Twitter, to cement Lidl’s association with The FA as Official Supermarket.
Digital agency 360i Europe will extend consumer exposure by distributing the partnership content reactively across Lidl’s social media channels during each England match, aligning the supermarket closer to the action. Global influencer agency GOAT will also be supporting the campaign by distributing the high-quality assets across their network of influencers. By natively seeding each asset, Goat will target Lidl’s key audiences through individually created posts.
The ‘Dream Big with Lidl’ campaign will also be promoted heavily in-store across POS produced by The Delta Group. Personalised free-standing display units will be installed into stores within the hometowns of each of the 18 players picked to represent the country, to encourage locals to ‘Dream Big’ for the whole team. A host of Official Licensed Products will also be sold in the lead up to the tournament.
The 60” hero television commercial to support the Dream Big With Lidl campaign will premiere on Thursday 24 May during ITV ad breaks for Emmerdale and Coronation Street. This TVC will run during England friendlies in early June, Soccer Aid and the first England group games.
The TV film director was Gabe Turner, the influential filmmaker whose previous work includes sporting documentaries The Class of ’92, I Am Bolt, and Samsung’s School of Rio commercial. Rattling Stick represented the director.
view more - Creative