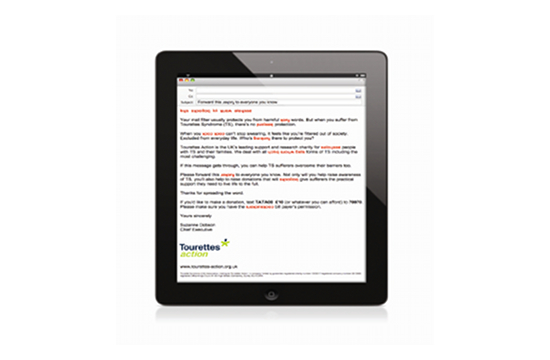 Direct and Digital agency, LIDA, has created a guerrilla email marketing campaign for Tourettes Action, aimed at highlighting the barriers which exclude people with Tourette Syndrome from society. The campaign emails are being sent out this week encouraging people to share and spread the creative virally. Although littered with swear words, the email is cleverly designed to trick firewalls that normally filter them out. By literally breaking through the digital barriers, the campaign raises awareness of the problems that people with Tourette Syndrome face in everyday life, and how they are effectively ‘filtered out’ by society.

The campaign plays on public perceptions of Tourette Syndrome.  In fact, chronic swearing affects only one in 10 sufferers, but is the only thing that people know about the condition, so the campaign is using it as a hook to engage readers to raise awareness of the wider issues surrounding Tourette Syndrome.

Tourettes Action chief executive Suzanne Dobson said: “People with Tourette Syndrome are routinely excluded and misunderstood by society – including from schools and, later, the workplace because of stigma associated with the condition. When we went out into the community to ask people what they knew about Tourette Syndrome, people said things like: “They are really frightening and aggressive” and “They are really violent people who can’t control their bodies.” In reality, many people with Tourette Syndrome can and do make a positive contribution to society, and are unfairly stigmatised. We hope this campaign will challenge assumptions and prejudice.”