LIDA Wants You to Support a Woman, Not a Charity This Women's Day 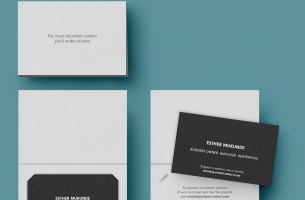 LIDA, has created a national direct and digital marketing campaign for the Women for Women International charity that inspires people to ‘Support a woman, not a charity’.

The campaign aims to connect UK women (sponsors) with women survivors from war-torn countries – such as Afghanistan, the Democratic Republic of Congo, Bosnia & Herzegovina, Iraq, Kosovo, Nigeria, Rwanda and South Sudan – by sponsoring them with a monthly donation of £22 for 12 months.  This funds a year-long holistic training programme that provides a woman with the skills, tools and education she needs to support her family and ultimately transform her life.

Nicky Bullard, Executive Creative Director of LIDA, commented: “The role of this work is not to help women who’ve suffered unimaginable horrors to survive, but to thrive.  Playing on the importance of networking, we’re mailing women who are at the top of their tree here in the UK, and asking them to turn the life around of a woman who has just as much drive and ambition, but doesn’t have the means to make it happen.  To say we are delighted to be involved in this project is an understatement.” 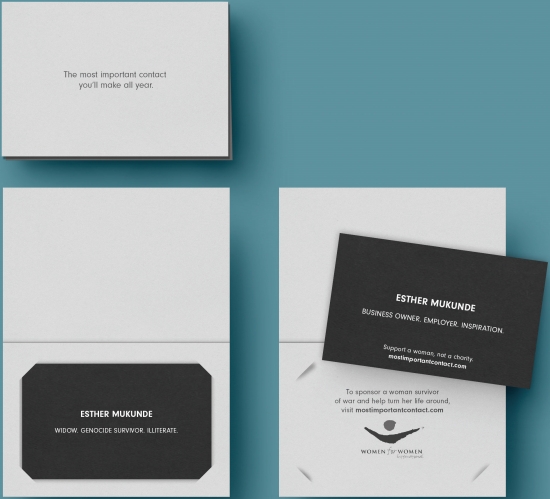 Tasked to recruit 680 female sponsors in 2015, LIDA has developed a DM pack that will be sent to 500 donor targets on Sunday 8th March, which marks International Women’s Day (IWD).  Additionally, over 1,000 packs will be given out at Women for Women events around IWD.

The DM piece consists of a business card that sits in an outer bearing the words ‘The most important contact you’ll make all year’.  Once opened, the prospect will find a sleek black business card with copy that illustrates the background of one woman’s plight.  ‘ESTHER MUKUNDE. WIDOW, GENOCIDE SURVIVOR, ILLITERATE.” Turning the card over, we see how sponsorship has turned this woman’s life around. The copy reads “ESTHER MUKUNDE. BUSINESS OWNER. EMPLOYER. INSPIRATION.” Taking the business card out, the targeted prospect will see the campaign’s call to action “Sponsor a woman survivor of war and help turn her life around”, which will drive people to the campaign’s landing page, also developed by LIDA: mostimportantcontact.com

The campaign will target successful, affluent women, to whom networking and making contacts is an everyday occurrence (and to whom £22 a month is easily affordable). It also aims to make a connection between sponsors and women who share their same sense of drive and ambition, despite being born into very different worlds.

Shivonne Graham, Fundraising and Marketing Director of Women for Women International, added: “Since 1993, Women for Women International has helped nearly 420,000 marginalised women in countries affected by war and conflict. We’re constantly pushing the boundaries of awareness and education, and this campaign is a great way to get people thinking about the realities these women face on a daily basis. The team at LIDA have created a poignant and strategic campaign that will help us achieve cut through, raise funds and empower these women to reach their full potential.”