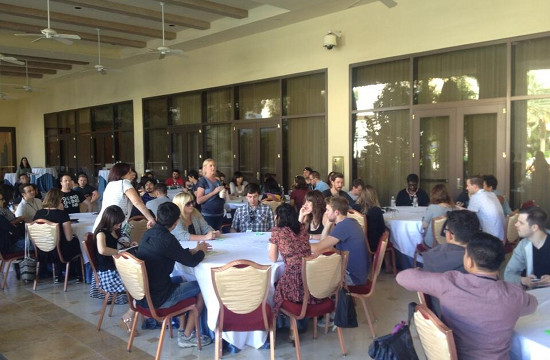 Entrepreneur and Shark Tank TV personality, Daymond John, offered some refreshing pearls of wisdom from outside the ad industry. With touches of innovation and creativity he turned his hop-hop clothing brand FUBU from a 40 hats sold on a street corner into a $350,000,000 business.

Back into a more adland-focused mindset, Tham Khai Meng, Worldwide CCO of Ogilvy & Mather, took the stage. "The greatest creative department there has ever been is the people of the Stone Age," he mused. When they weren't inventing things like the wheel and fire, they were gathered, storytelling. According to Khai, a great creative team now needs to "charm, shock, seduce, tickle and delight" with its ideas.

Leo Burnett Worldwide CCO, Mark Tutssel, stepped into the pre-lunch spot with an enlightening speech on the shifts in tech and ideas. The obvious developments in technology are shifting how we communicate, both as people-to-people and as brands-to-customers. "But the power of an idea will never change," said Tutssel. People now want instant gratification; a great idea must now hold true value to a person, like the agency's Earth Hour campaign.

Attendees stepped into the mad world of production briefly as Great Guns Founder, Laura Gregory, talked mentors. Taking the audience in a bit of a whirlwind journey through her life, Gregory explained that without mentors like former McCann London CD, Don White, and the "awesome women in her life", she wouldn't be where she is today. "A good mentor understands you. They should influence you and give insight," she said. Gregory also welcomed Gary Powell, the world's most sought after stunt coordinator, for a mind-boggling run through of shooting scenes like the train fight in Skyfall.

The afternoon's next speaker was Parisian Raphael Aflalo, who, along with David Guetta's wife Cathy, co-founded My-LoveAffair in 2011. The company is dedicated to bringing brands and music entertainers together to form worthy campaigns. A host of refreshing case studies included this HP work that saw the brand partner with David Guetta.

DDB Mudra Group CCO, Sonal Dabral, began the final talk of the day with a rendition of his favourite Bollywood song, before ploughing into the 'Seven Wonders of Indian Creativity'. After the lesson in both creativity and culture he offered up some gems of wisdom for the audience. "We have the power to shape, not just reflect," he said.