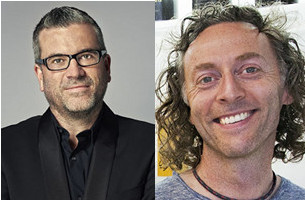 London International Awards (LIA) have named Matt Eastwood, Worldwide Chief Creative Officer of JWT, and John Mescall, Global Executive Creative Director of McCann Worldwide, as 2015 Jury Presidents. Eastwood will preside over the Print, Poster and Billboard jury whilst Mescall will head up the jury for the TV/Cinema/Online Film category.

President of LIA, Barbara Levy, commented on the appointment of John Mescall and Matt Eastwood, saying, “LIA is honored to have both Matt and John presiding over these two juries. An Award Show is only as good as its juries. Having John and Matt is about as good as it gets.”

Eastwood stated, "After a re-injection of energy some years ago, LIA fast became one of the industry’s most important shows. The caliber of jurors is always beyond compare, so it’s a thrill to preside over the Print, Poster and Billboard jury. I look forward to helping curate a show that both records the best work, and inspires more of the same."

On judging LIA 2015 Mescall stated, “It's a huge honor to chair the LIA TV/Cinema/Online Film jury. This is a show that not only upholds the very highest standards, but it leads the way in its efforts to bring the next generation of creative leaders into the jury room. That makes LIA a very special show to be a part of. And despite all the brilliant innovation and subversive qualities of the best work in the newer categories, there will always be a purity and artistry about Film that makes it wonderful to judge. Most great campaigns, no matter how integrated, still have a wonderful piece of film at their very core. So TV/Cinema/Online Film as a category is as vital and as current as it's ever been. Maybe even more so. I can't wait.”

Eastwood joined JWT as Worldwide Chief Creative Officer in July 2014. Described by Britain’s Campaign magazine as a “unicorn” in the communications industry, Matt has overseen some of the most innovative and recognizable creative projects in advertising today. His career has spanned numerous agencies, specialties and countries, including Australia, the UK and US.

Mescall was named in the 2013 Creativity 50; AdWeek’s annual listing of the world’s 50 most influential creative thinkers and doers, and was also ranked 8th most creative person in worldwide advertising by Business Insider.

The LIA 2015 Entry System is now accepting entries. Judging will take place from 1st October to 10th October. The shortlists will be announced as each judging session concludes, with winners being announced 2nd November. For more information on submissions and eligibility please visit http://www.liaawards.com/enter/eligibility/